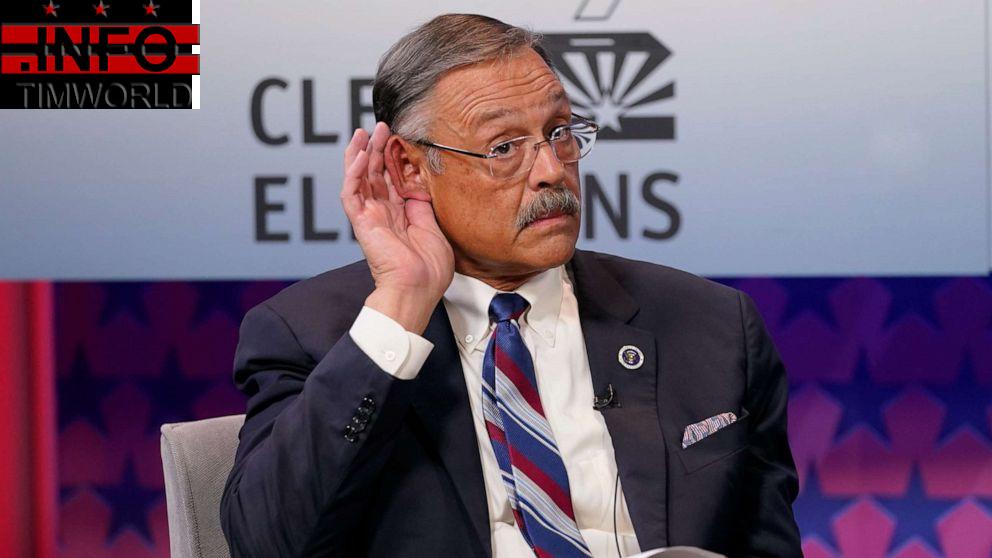 PHOENIX — Arizona Republican secretary of state candidate Mark Finchem revealed during Thursday’s debate that he has been interviewed by both the Justice Department and Jan. 6 committee about his alleged involvement in the Capitol attack.

This was the first time Finchem has publicly confirmed speaking on the matter with federal officials.

“They asked me, why was I there? I said, ‘Well, I think you already know. I was there to deliver an evidence package to Representative Paul Gosar,'” Finchem, who was subpoenaed by the committee earlier this year, told reporters after the debate.

The four-term, far-right Arizona lawmaker, who continues to espouse the “Big Lie” and is running to be the state’s chief election officer, revealed the Jan. 6 interview and Justice Department involvement in a back-and-forth on the debate stage with his opponent, Democrat Adrian Fontes.

“I was interviewed by the DOJ and the J-6 commission as a witness,” Finchem said. “So for him to assert that I was part of a criminal uprising is absurd. And frankly, it is a lie.” Finchem told reporters after the debate that the meeting was “a couple of months ago.”

Fontes, the former Maricopa County elections recorder during the 2020 election, prompted the comment by bringing up Finchem’s efforts to decertify President Joe Biden’s win, Finchem’s presence at the Capitol on Jan. 6 and affiliation with the Oath Keepers militia group.

“Good,” Fontes told reporters after the debate regarding the revelation that Finchem sat for investigators. “I hope they investigate, and if he did something wrong, I hope that they prosecute and convict him.”

ABC News has asked Finchem’s campaign whether he sat for more than one interview with federal investigators and whether he traveled to Washington for the sit-down.

Finchem, leaving the Arizona PBS studio immediately after the debate while reporters chased after him, said he was not asked by investigators about “Stop the Steal” coalition organizer Ali Alexander specifically, and when asked about Alexander’s characterization of him as a “close friend,” Finchem distanced himself, saying, “That’s probably an exaggeration.”

But on the debate stage, Fontes repeatedly tied Finchem to the insurrection.

“He’s part of an organization that has called for the violent overthrow of our government. He has supporters and he himself has called for a civil war in this country, the stockpiling of ammunition for this very war,” Fontes said. “It is an unhinged and violent aspect of Mr. Finchem that he’d rather not discuss.”

“Last time I checked, to be at a place when something is happening is not illegal,” Finchem countered. “I’ve been treated as a witness, not a subject.”

Finchem claimed he was in Washington, D.C., at the time of the attack to deliver a book of information to Rep. Paul Gosar, R-Ariz., which he said contained evidence of irregularities in the 2020 election.

“I was there to develop — or to deliver — an evidence book to two congressional members of my constitutionally elected congressional caucus, so that they had the information that they needed to have in the well of the Senate, when they went to argue for a question in controversy,” he said.

While maintaining that former President Donald Trump won the 2020 election, Finchem said he has “no idea” if there were irregularities in the August primary, which he won, adding, “It is what it is.”

“Not the process, not the people running things, not the rules,” Fontes replied, calling Finchem’s comment “most telling.”

On mail-in voting, Finchem said he doesn’t support every Arizonan getting a mail-in ballot, like Fontes tried to have enacted in Maricopa County in 2020, and dismissed concerns he would try to restrict mail-in voting. He said, “I don’t care for mail-in voting. That’s why I go to the poll.”

Fontes, who supports early and mail-in voting — an option the vast majority of Arizonans use to cast ballots — said, “Mr. Finchem wants to strip Arizonans of their capacity to vote by mail. That’s dangerous.”

Finchem has also previously said he supports getting rid of electronic voting machines in favor of a full hand-count of ballots.

MORE: Voters say abortion, inflation among their key issues: Swing-state residents speak out on their views

Fontes interrupted to say, “I think Article One, Section Four of the Constitution of the United States of America would disagree with Mr. Finchem’s assertion about who is charged with the time, place and manner of elections that clearly Congress plays a significant role and that happens to be the federal government, for your information, sir.”

Fontes, who lost his reelection as Maricopa County elections recorder to Republican Stephen Richer, has used his 2020 loss to defend Arizona’s election process.

Voting starts in Arizona on Oct. 12.