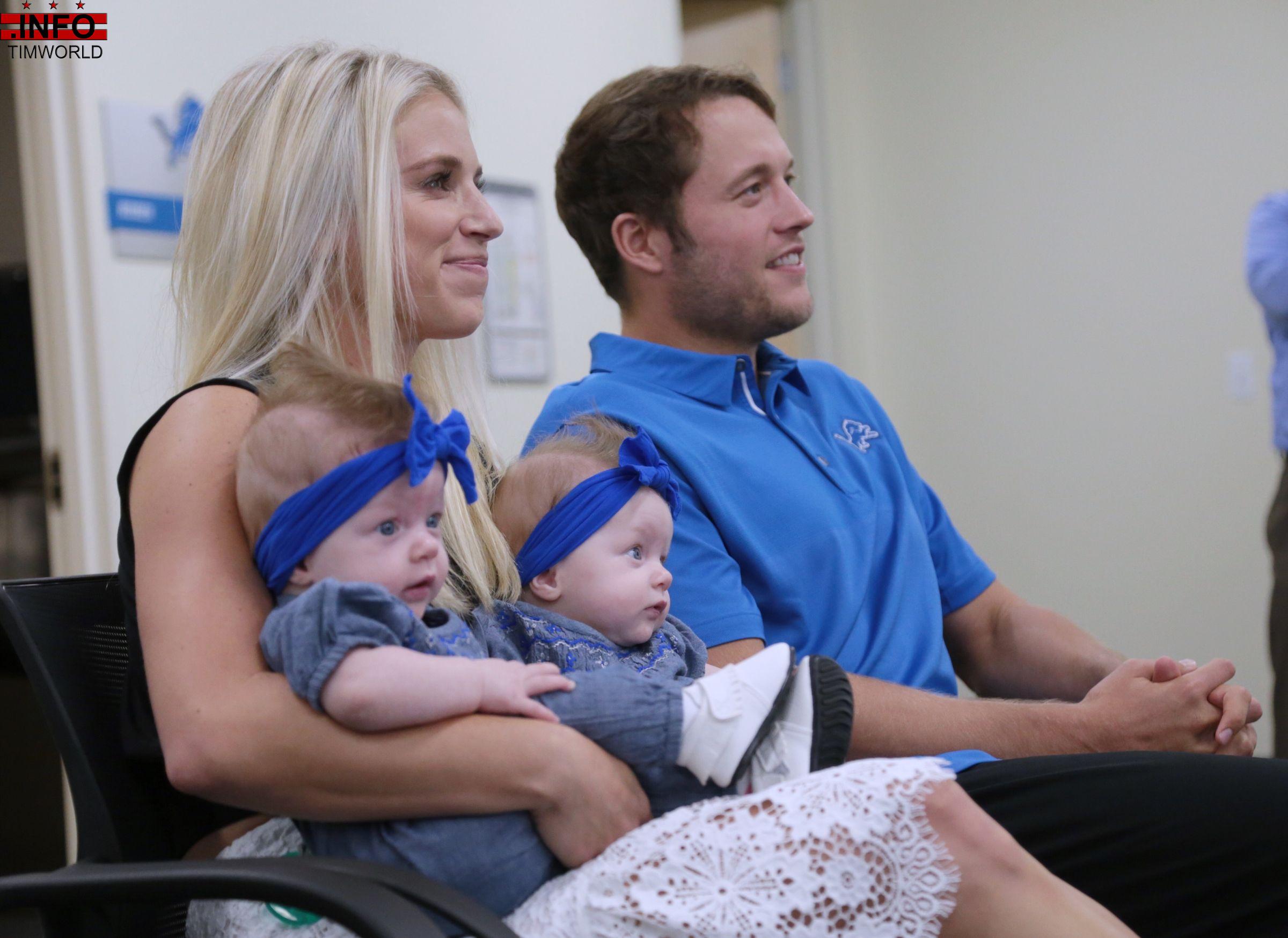 Now that he’s back, Stafford said he has been able to compartmentalize his wife’s health from his job as Detroit Lions quarterback.

Making his first extended comments since his wife’s surgery, Stafford credited a strong support system and his wife’s toughness for allowing him to turn his attention back to football.

“Situations like this change your perspective on a lot of things,” Stafford said Tuesday during Day 2 of organized team activities. “It kind of puts stuff where it should be. But it’s been good. Like I said, I’m just happy to be out here throwing the ball around to some really talented guys, having some fun, playing some ball.”

PANTHERS: Undrafted player shows up with ‘will pass rush for hot wings’ sign

Stafford missed the first week of the Lions’ formal offseason program last month to be by his wife’s side as she recovered from surgery to remove a benign tumor from her cranial nerves.

He was back at the facility for workouts the next week, and admitted Tuesday there were times he found it “tough” to immerse himself in football.

“Some days I was – Kelly had a good night, some days I was here loving it,” Stafford said. “And Kelly had a bad night, I was trying to get home as fast as I can. It’s been up and down, just as we kind of expected it to be. But like I said, everybody here has been extremely, extremely supportive, and so have my teammates have been great, too. They understand. They know that I’m committed, I’m dedicated to this team and our future and our season, but at the same time a lot of those guys have families, too, and understand how important that is as well.”

Stafford declined to provide a detailed update of his wife’s health Tuesday, saying, “I think she does a pretty good job of keeping you guys posted.”

Kelly Stafford has provided regular Instagram updates of her recovery, including one Monday in which she wrote she was “struggling” after traveling out of town for a weekend wedding.

A big goal of mine after surgery was to make it to our close friends @davidkoonin and @jereed39 wedding. These people mean so much to me and I really didn’t want to miss it. Although I’m struggling after the weekend, I would have it no other way.. It was completely and totally worth it. I got to witness them exchange vows in a beautiful, joint religion, ceremony and then celebrate all night long. Jessica was absolutely stunning and Koonin looked as happy as I have ever seen him..Congrats to y’all @davidkoonin @jereed39! Love y’all so much!

Stafford said he wouldn’t have been able to return to work so quickly if not for his mother-in-law, who spent more than a month in Michigan helping with Kelly’s recovery, and the caregiver for his and Kelly’s three daughters.

At one point, Stafford said Kelly was “telling me to get the heck out of the house and go take care of what I needed to take care of” with the Lions.

“I’ve got an obligation to this team that I love fulfilling,” Stafford said. “I want to be here, we’ve got a new offense, I’m having a blast trying to learn it and teach these guys as well, but at the same time had a lot going on at home and they were really flexible with me in letting me kind of come in on some off hours and make sure that I was taking care of my obligation, my duty to the team and then be home as well.”

In some ways, Stafford said football has helped him cope with his wife’s health problems.

He said learning a new offense under first-year coordinator Darrell Bevell has forced him to keep his focus on football when he’s in Allen Park.

“When I’m here, I’m here,” Stafford said. “There’s maybe some time before practice in the locker room or something, just checking in, making sure everything’s OK. But when I’m out here I’ve got to be locked in. I feel like (I’ve had) a lot of practice at my position being able to kind of compartmentalize what’s going on. And if I’m out here thinking about something else it’s going to be an ugly day for the offense so I’m trying to do everything I can to be locked in.”

On Tuesday, Stafford looked sharp throwing the ball in full team drills during a no-contact practice and without his top two receivers, Marvin Jones and Kenny Golladay, who spent the session working with the Lions’ rehab group.

He said he’s “as far along as I should be” when it comes to learning the Lions’ new offense and determined to improve on last year’s disappointing season.

The Lions won just six games last year, their fewest since 2012, and Stafford threw for fewer than 4,000 yards while playing through a lower back injury.

“Obviously we didn’t win as many games as we wanted to last year, to a man probably didn’t play as good as we could, myself included, no question,” Stafford said. “But I’m motivated every year I come in, whether it’s by the past or really just looking forward to the future, I want to go out there and win games. I want to play as good as I can possibly play and if I play really well it’s going to help our team have a chance to win. So that’s what it’s all about at this point and I’m just trying to do everything I can.’

Iowa State beats No. 16 Oklahoma at home for first time since 1960
Beckham, Seager lead Mariners over Tigers 10-2
Game 7 predictions: Who has the edge in Denver Nuggets-Utah Jazz elimination game