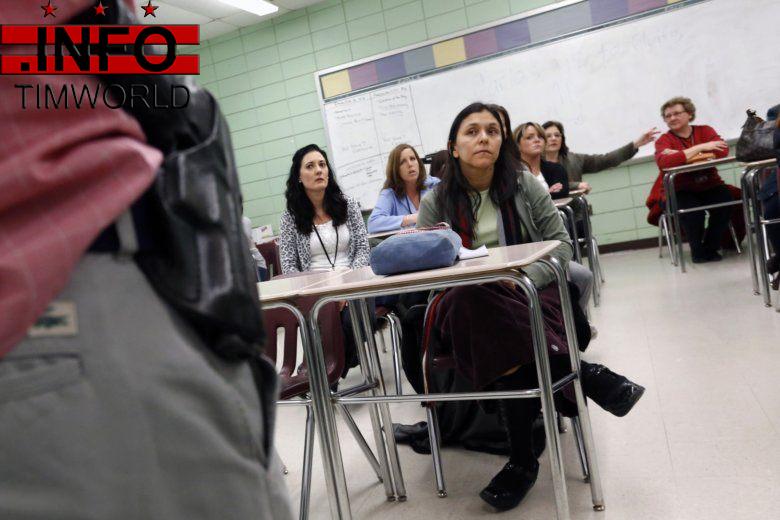 BALTIMORE (AP) — The actions of students who died tackling gunmen at two U.S. campuses a week apart have been hailed as heroic. At a growing number of schools around the country, they also reflect guidance to students, at least in some situations, to do what they can to disrupt shootings.

A majority of school districts have now embraced such an approach, with experts saying educators need to give staff and students as many options as possible in the worst-case scenario.

“In all honesty, I don’t know of another strategy,” said teacher Kelly Chavis, whose Rock Hills, South Carolina, school endorses a strategy known as Avoid, Deny, Defend. “What else would you do if you did not try to get away in a situation?”

Many schools have stuck with the traditional approach of locking down classrooms and letting law enforcement confront the shooter, especially in grade-school settings. Encouraging students or faculty to do otherwise, critics say, could make them more of a target.

At the STEM School Highlands Ranch in suburban Denver, where student Kendrick Castillo was killed while confronting a gunman on Tuesday, the school uses a “Locks, Lights, Out of Sight” protocol, according to spokesman Gil Rudawsky. He declined to say whether any of the school’s training for students addresses whether they should fight an intruder.

There always have been students willing to take action, said Greg Crane, who founded the for-profit ALICE Institute, which stands for Alert, Lockdown, Inform, Counter, Evacuate. He said he created it in 2001 based on what had already been done by students including Jake Ryker, who tackled a shooter at Thurston High School in Oregon in 1998 despite being shot in the chest.

Many people have a “warrior mindset, a hero mindset,” Crane said. “It’s just, have we cultivated them with some information and with some training so that when they are the first one to stand up and start moving to do something, maybe they’re not alone?”

Educators from over 5,000 school districts have received the program’s training, often from certified law enforcement officers, Crane said. He said the program does not teach fighting strategies. Rather, it encourages people to make noise, create distractions and confuse the attacker.

If an assailant gets too close, students are told to grab anything and throw it and scream, with the idea being to create enough chaos to escape. No young students are told to tackle or otherwise try to make physical contact, but staff members and older students have that option, Superintendent George Roberts said.

“The adults are trained how to grab the arms, grab the legs and subdue” until police arrive, said Roberts, who was principal at Maryland’s Perry Hall High School in 2012 when a student brought a shotgun into the cafeteria and critically wounded another student. “This more active response provides a level of choice.”

Karen Shepard has several children and grandchildren in the Athens, Pennsylvania, school district, which also adopted ALICE training this year. She said she would prefer the children know not to stand clustered in a corner if a gunman burst into their classroom.

“They should barricade, (and) they should have something in their hands,” she said. “At least they’d have a fighting chance.”

It’s a frightening conversation at any level, said Joseph Erardi, who was superintendent in Newtown, Connecticut, for four years after a gunman killed 26 people at Sandy Hook Elementary School.

“What we’ve learned over time is to provide staff and students with as many options as possible in the moment,” said Erardi, who manages the School Superintendents Association’s School Safety Crisis Toolkit. “You never want to take that commonsense element out.”