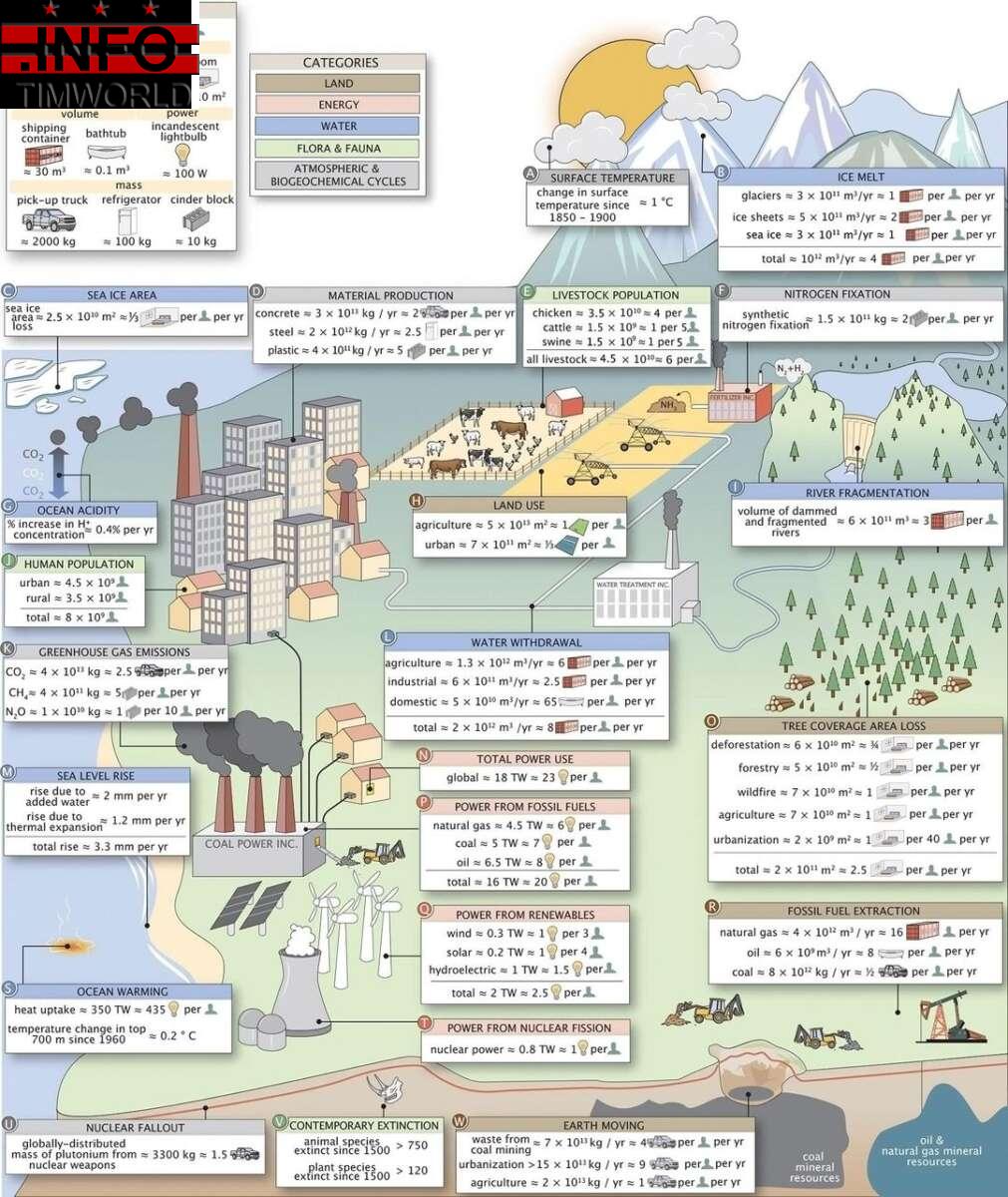 Caltech researchers have developed the Human Impacts Database. It contains global data on how humans have impacted the planet. Credit: Caltech

If you’re in a major city nearly anywhere in the world, it is likely quite easy to grab a cheap hamburger from a nearby fast-food restaurant. But what you may not realize is that the meat in that inexpensive burger can actually illustrate a grand narrative about how humans have shaped the planet. From the land used to raise cattle for beef consumption, to the water used to feed those cattle, to the fuel used to transport the beef all over the world, the human progress that enables us to easily buy a burger—and, for that matter, hop on a plane, charge our phones, and take part in the multitude of activities that make up our everyday experiences—has changed the biosphere.

Now, California Institute of Technology (Caltech) researchers have developed a database containing global data on how humans have impacted the planet. The Human Impacts Database is designed to be accessible to scientists, policymakers, and everyday citizens, and provides information ranging from global plastic production (400 billion kilograms per year), to the number of cattle on Earth (about 1.6 billion), to global annual mean sea level rise (approximately 3.4 millimeters per year). The data are broken into five main categories: water, energy, flora and fauna, atmospheric and biogeochemical cycles, and land. These also include 20 subcategories. Where available, the database includes time series to help illustrate how these numbers have changed through the years.

The project was conducted in the laboratory of Rob Phillips, Fred and Nancy Morris Professor of Biophysics, Biology, and Physics; and led by former graduate students Griffin Chure (PhD ’20) and Rachel Banks (PhD ’22). A paper describing the research was recently published in the journal Patterns.

The team hopes that by having access to simple numbers about human impacts, citizens and scientists alike can develop >

Griffin Chure (PhD ’20) says about the Human Impacts Database: “From a personal standpoint, this project has completely changed my life. It’s changed the direction of my science. I’m confident that I’m going to spend the rest of my scientific career focusing on how humans are changing biology.” Credit: Caltech

“For example, a friend texted me asking how to compare the impact of dairy cattle versus beef cattle,” Chure says. “We can use our database to figure out that, in terms of land requirement, greenhouse gas emissions, and water use, beef cattle are more impactful by a factor of five or more on a per-calorie basis. We really hope that this database is useful for both ordinary citizens trying to make decisions and for people thinking about policy. I view being literate with numbers as a prerequisite for being informed, whether you’re a citizen or a scientist.”

The project takes a planet-wide look at human impacts rather than sorting by country or region.

“For the most part, we provide global values,” Banks explains. “We also draw data from all sorts of different resources: scientific papers, governmental and intergovernmental reports, and industry reports in some cases. We’ve made an effort to see how well these reports align. If we have multiple sources, we report more than one value for a number in order to give us a better sense of the certainty on the value.”

There is a long tradition in the sciences of building databases that contain key quantities in physics and chemistry. Inspired by this work, in 2009, Phillips and collaborator Ron Milo of the Weizmann Institute of Science in Israel developed the website BioNumbers, a publicly available site where researchers can find quantitative data on various facets of biology taken from scientific literature, such as the number of proteins involved in a particular biochemical process. The Human Impacts Database brings those same motivations to studying the many ways in which humans interact with land, oceans, and atmosphere.

Rachel Banks (PhD ’22) says of the Human Impacts Database project: “I was really inspired by it. I had never heard people talk about human impacts in this way, and it’s something that I had been curious about for a long time — so the next day I jumped on the project.” Credit: Caltech

During his PhD work, Chure frequently referred to BioNumbers, but realized it would be useful to have a database that focused specifically on quantifying how human activity impacts planetary-scale processes. He began to develop the Human Impact Database during the early months of the

The team emphasizes that the database is not comprehensive or exhaustive; they plan to continually update the numbers as new data comes out.

“In my view, the root to understanding is numeracy: once you have the numbers, it becomes clear what the problems are, which things are significant, and which things are less so,” Phillips says. “Charles Darwin once remarked that numeracy gives one a ‘sixth sense.’ The Human Impacts Database is a first step toward providing a coherent invitation to that sixth sense in the context of the great human experiment.”

The project was funded in part by the Resnick Sustainability Institute at Caltech. “Projects like the Human Impacts Database are a unique resource that can help experts and the general public alike to put into clearer perspective the various ways people are affecting the planet,” says Neil Fromer, Executive Director of Programs at the RSI. “Supporting the development of this tool, alongside the other incredible research the Resnick Sustainability Institute supports on campus, is key to fulfilling our mission to educate and inform people about their impact on the world, as well as provide solutions to the problems these impacts are causing.”

Chure and Banks are the study’s lead authors. In addition to Phillips, additional Caltech coauthors are postdoctoral scholar Avi Flamholz, and graduate students Nicholas Sarai and Ignacio Lopez-Gomez. Other co-authors are Mason Kamb of the Chan-Zuckerberg BioHub, and Yinon Bar-On and Ron Milo of the Weizmann Institute of Science in Israel. Funding was provided by the Resnick Sustainability Institute at Caltech and the Schwartz-Reisman Collaborative Science Program at the Weizmann Institute of Science.