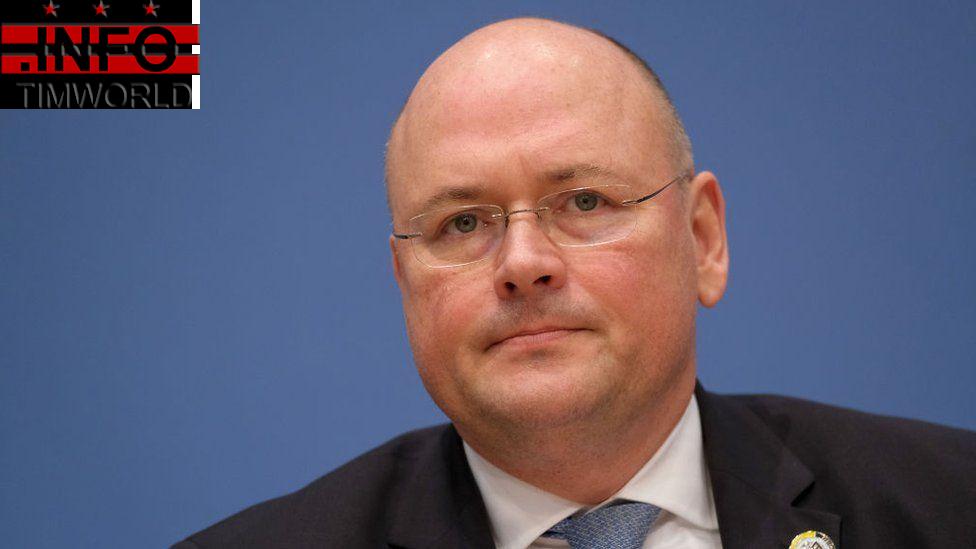 Published18 hours agoSharecloseShare pageCopy linkAbout sharingImage source, Getty ImagesBy Matt MurphyBBC NewsGermany’s cybersecurity chief has been fired after allegations of being excessively close to Russia through an association he helped set up.

German media have accused him of having had links with people involved with Russian intelligence services.

The interior ministry is investigating allegations made against him.

But it confirmed he had been fired with immediate effect.

Mr Schönbohm had come under scrutiny after his potential links to a Russian company through a previous role were highlighted by Jan Böhmermann, the host of one of Germany’s most popular late-night TV shows.

Before leading the BSI, Mr Schönbohm had helped set up and run the Cyber Security Council Germany, a private association which advises business and policymakers on cybersecurity issues.

He is said to have maintained close ties to the association and attended their 10th anniversary celebrations in September.

One of the association’s members was a cybersecurity company called Protelion, which was a subsidiary of a Russian firm reportedly established by a former member of the KGB honoured by President Vladimir Putin.

Protelion was ejected from the association last weekend, and Cyber Security Council Germany says the allegations of links to Russian intelligence are untrue.

A spokesperson for Interior Minister Nancy Faeser appeared to confirm that Mr Schönbohm’s sacking had come in response to the recent reports, saying: “The background to this is not least the allegations revealed and widely discussed in the media.”

The spokesperson added: “Necessary public trust in the neutrality and impartiality of his leadership as president of the most important German cybersecurity agency has been damaged.”

But they emphasised that the security chief would be “presumed innocent” while an investigation into the allegations was conducted.

The German media outlet Der Spiegel earlier reported that Mr Schönbohm had requested formal disciplinary proceedings to be opened against him, after receiving no “feedback” from the government after the initial accusations.

He said he did not yet know “what the ministry has examined and what the concrete allegations against me look like”.

Berlin is said to be increasingly concerned that its critical infrastructure could be targeted by Russian intelligence as it steps up its support for Ukraine.

Last week, the defence ministry announced it planned to deliver four anti-air defence systems to Kyiv. A single IRIS-T unit is said to be capable of defending an entire city from air assaults.