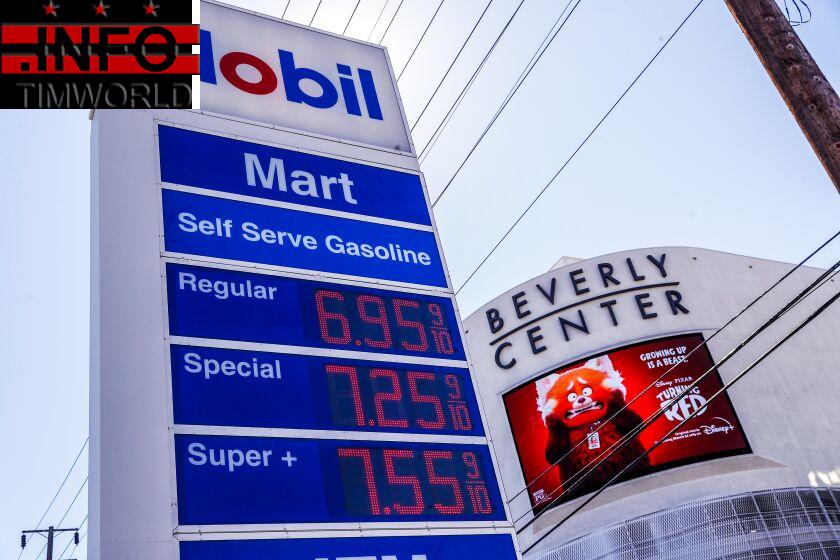 Los Angeles County’s average gas price rose Wednesday to $5.545 for a gallon of self-service regular, up 8.5 cents from the day before, AAA data show, as refinery problems accelerated increases that began nearly three weeks ago.

Nationwide, a 99-day run of falling gasoline prices — a streak that gave consumers a glimmer of hope that red-hot inflation might be cooling — has ended, with pump prices still much higher than a year ago.

The nationwide average price for a gallon ticked up less than a penny Wednesday, to $3.68 a gallon, according to AAA. That’s down from the record $5.02 average in mid-June. The L.A. record was $6.462, also in mid-June.

The question now is whether pump price increases are just a blip or the precursor to the return of sustained higher prices. The answer matters to motorists and to President Joe Biden, who has taken credit for driving prices lower by releasing millions of barrels of oil from the nation’s reserves.

Gasoline prices mostly reflect trends in global oil prices, and crude — both the U.S. benchmark and the international Brent — has been slumping since mid-June on growing fears of a global recession that would reduce demand for energy.

A BP refinery in Toledo, Ohio, was shut down Wednesday after an explosion and fire killed two workers. There are several weeks remaining in peak hurricane season in the Gulf of Mexico. The National Oceanic and Atmospheric Administration says the likelihood of increased hurricane activity this year is 65%.

Many energy analysts believe that prices are more likely to rise than fall in the next few months. However, changes in sentiment about the economy, Russia’s war against Ukraine, and even hurricane season — always a threat to disrupt refineries along the Gulf Coast — make predictions uncertain.

“I suspect that we will see choppy prices for gasoline through year end, with some down days and up days,” said Tom Kloza of the Oil Price Information Service. He predicted that the next streak will be a run of price increases early next year, driven by investors, speculators and “the fear that there won’t be enough fuel to go around.”

Phil Flynn, an analyst with the Price Futures Group, said prices will head higher once withdrawals from U.S. Strategic Petroleum Reserve — a million barrels per day for six months — end this fall.

“The market is going to start pricing that in, and refiners are not going to be getting this cheap oil from the reserve,” Flynn said. “The odds are we’ll see a significant price spike of oil come winter.”

Some businesses, such as airlines, have been able to pass higher fuel prices on to their customers. Others haven’t been able to do that.

“We haul for farmers, and we can’t raise [prices] for the farmer because they are struggling too,” said Mike Mitchell, part owner of Mitchell Milk Hauling, which carries about 10 million pounds of milk a year from farms in northwestern Pennsylvania.

The company’s seven trucks burn through about $20,000 in gasoline a month, and the drop in gas prices this summer provided only limited relief.

“Everything else you buy goes up,” Mitchell said. “Every part for the truck has doubled, just about.”

Al DeGennaro, a lawyer for Pennsylvania waste hauler J.P. Mascaro & Sons, said high gas prices have taken a toll, and their unpredictability is hard to handle.

“It creates uncertainty as to how you’re bidding in the future … a lot of government contracts are three to five years,” said DeGennaro, whose company has a fleet of about 300 trucks.

The nationwide average price soared above $5 a gallon — and over $6 in California — in June, as economic recovery and an increase in travel boosted demand for gasoline, and Russia’s war in Ukraine caused a spike in oil prices.

The surge in prices caused financial pain for families and a political headache for the Biden administration. With the midterm elections for Congress less than two months away, it’s hard to know whether voters will reward Biden and the Democrats for the recent fall in prices — down $1.34 a gallon from the record set on June 14 — or blame them because prices are still well above the $3.19 average one year ago.

Besides releasing oil from the strategic reserve, Biden pressed other oil-producing countries to boost output, and he clashed with oil company executives after accusing them of making unseemly profits while Americans struggled with high pump prices.

“Every time prices go down they are taking a victory lap, even though prices are substantially higher than they were when they took office,” analyst Flynn said of administration officials.

U.S. and international oil prices rose above $120 a barrel in June but have fallen since. On Wednesday, West Texas Intermediate crude was trading around $83, while the international benchmark, Brent crude, was about $90.