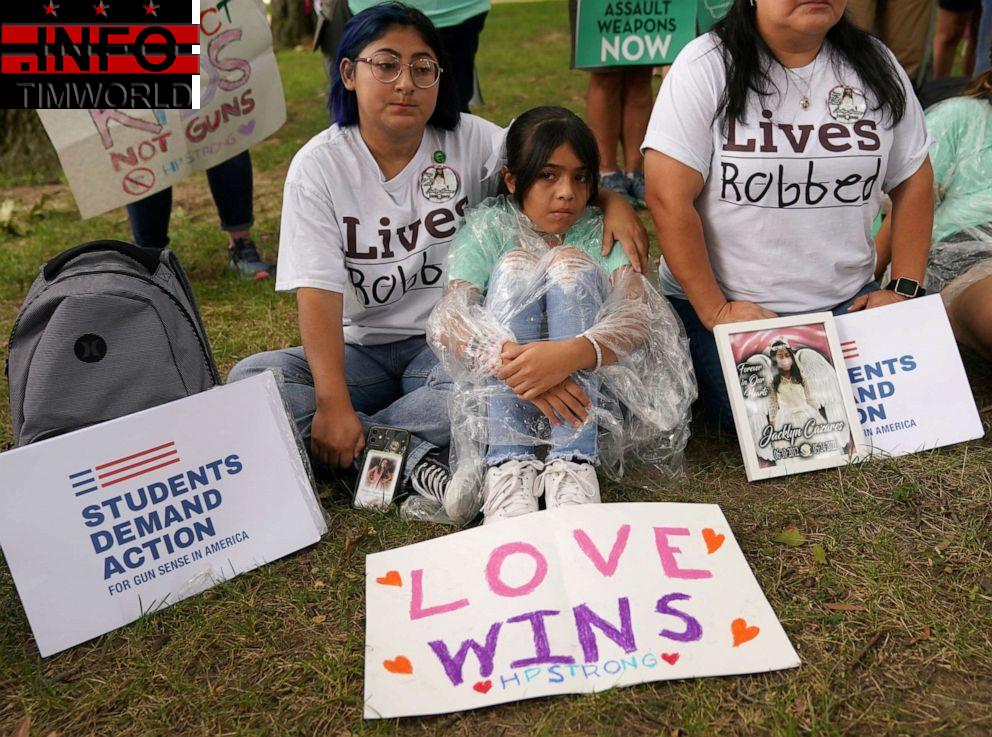 Washington, D.C. — Survivors and surviving families from at least 9 mass shootings in the United States gathered Thursday on Capitol Hill to advocate for a federal assault weapons ban.

After marches and rallies earlier this year in support of H.R. 1808, which proposes a civilian ban on assault weapons, the bill passed in the House in July and reached the Senate on Aug. 1.

With the Senate in recess for most of August, consideration for the bill has just begun, but it faces a tough road ahead: Senate Democrats would need at least 10 Republican votes to overcome the filibuster.

Jazmin Cazares, whose sister Jackie was killed in the school shooting in Uvalde, and Caitlyne Gonzalez, a student at the school, join activists at a rally calling on Congress to pass legislation to ban assault weapons at the U.S. Capitol in Washington, September 22, 2022.Kevin Lamarque/Reuters

Dion Green, who survived a mass shooting in Dayton, Ohio, in 2019, but lost his father in the tragedy, spoke at the rally in support of the legislation.

“We have to continue to come together like this, continue to be the game changers to prevent these events from happening again,” Green told ABC News. “Our pain is real, and we’re not alone.”

Others echoed Green, saying they find solace in the support they’re able to give one another, as many families present are still working through their grief from losing loved ones.

Nubia Hogan lost her father, Eduardo Uvaldo, at the July 4 parade shooting in Highland Park, Illinois. Hogan said she and her sister, Tanya Castro, have chosen to be his voice and advocate for a ban on assault weapons since he cannot speak for himself.

The sisters told ABC News if it takes marching and talking to politicians to prevent another family from being affected by a mass shooting carried out by an assault weapon, that’s what they will do.

“These type of things shouldn’t be happening. It’s just like every month you hear about something going on… you have to put a stop to it…there has to be a change, you know, because families shouldn’t have to go through what we’re going through,” Hogan said.

When it gets tough, they’re able to find comfort through fellow shooting victims’ family members that advocate alongside them, they said.

“It feels like we’re with people that know… that understand us…that really understand us, because they’ve been through it. They lost someone. There’s a connection. It kind of feels like you get an extended family,” Hogan said.

The sisters added that knowing other loved ones who have experienced guilt helps them heal and feel less alone.

An activist takes part in a rally calling on Congress to pass legislation to ban assault style weapons, at the U.S. Capitol in Washington, Sept. 22, 2022.Kevin Lamarque/Reuters

Jazmin Cazares, sister to 10-year-old Uvalde shooting victim Jacklyn Cazares, said people don’t seem to understand the guilt she feels “for even waking up in the morning, let alone having fun,” but finds purpose in advocacy.

She told ABC News that families like her own now find themselves in “a club that no one wants to be a part of.”

Her father, Javier Cazares, rallied alongside Jazmin, and reflected on the gathering of families.

“Now more than ever we have more families of different shootings. We’re a coalition of people from Vegas to everywhere else,” Javier Cazares told ABC News.

He added, “We’re getting bigger and bigger unfortunately for the same reason—our kids lost. At first you hear us one by one, and now you hear all the voices coming together and it’s very powerful.”

Survivors from the Sandy Hook Elementary School shooting in Newton, Connecticut, who are now seniors in high school, came with the Junior Newtown Action Alliance and urged Senators to pass the assault weapons ban.

“Congress should’ve banned these weapons of war after Sandy Hook,” Leah Crebbin, co-chair of the Junior Newton Action Alliance, said to the crowd. “The acts of terror and atrocities that have been committed will continue to occur if Senators stand by and do nothing.”

Rep. David N. Cicilline, D-R.I., who authored H.R. 1808, told ABC News via email: “It is always so inspiring to see groups like the one who gathered on Capitol Hill today, though I wish they didn’t need to be here. Families shouldn’t be forced to demand that their representatives do their jobs and act to keep their communities safe.”