Democrats are trying out a new pitch with Latino voters, one centered on abortion rights 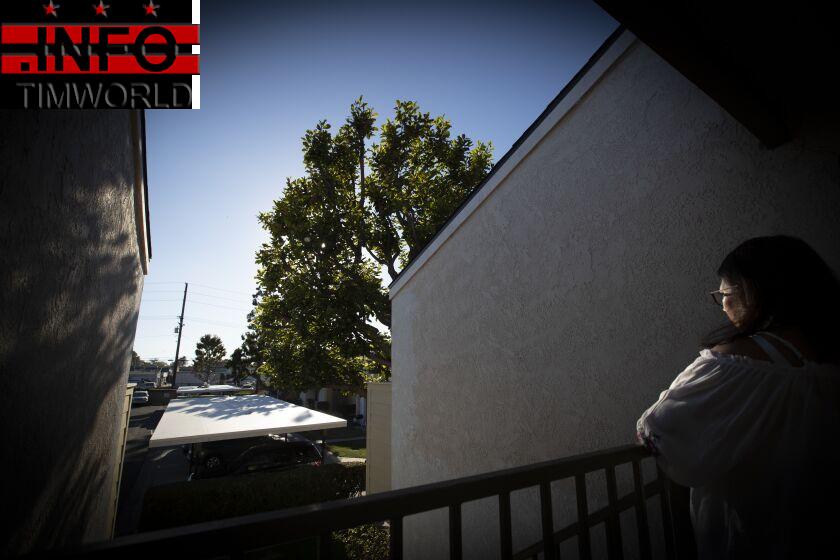 Gabe Vasquez’s latest campaign ad is simple to the point of austere: Black-and-white portraits of women, a melancholic piano score, and a recitation of his opponent’s stance on abortion.

“I will always protect a woman’s right to choose,” Vasquez, a Democrat, vows, drawing a contrast with his Republican opponent, Rep. Yvette Herrell.

Such a commercial could be running in any number of contested congressional seats, where Democrats nationwide are leaning hard into abortion rights as the November election approaches. Most notable in Vasquez’s pitch, however, is that it is airing, in both English and Spanish, in New Mexico’s 2nd District — the most Latino seat in the state with the highest percentage — 47.7% — of Latinos in the nation.

Just as the reversal of Roe vs. Wade has scrambled Democrats’ overall midterm playbook, it has also prompted the party to rethink its long-standing approach with Latino voters. The party is putting the abortion issue at the center, discarding decades of conventional wisdom that it would be a political loser with a group of voters that is overwhelmingly Catholic and seen as socially conservative.

The shift comes amid Democratic anxiety and Republican optimism over a small but significant rightward shift among Latino voters as a whole. November will test the two parties’ competing theories — whether abortion will give Democrats a reprieve or the GOP will build on its gains by emphasizing inflation and crime.

“Abortion is not the top issue. The economy is the top issue for voters across America,” said Danielle Alvarez, communications director for the Republican National Committee. “Democrats are talking about this because they don’t have anything else to talk about.”

The specter of the Roe reversal looms large in southern New Mexico from the moment drivers cross the state’s eastern boundary with Texas, which has three variations of abortion bans on the books. Two Planned Parenthood billboards, one in English and another in Spanish, declare “You are entering New Mexico, which supports abortion rights.” With Arizona, its western neighbor, reinstating a near-total ban last month, New Mexico solidified its status as a rare haven for abortion access in the Southwest.

The decision has reshaped politics in the area too, said Ruth Rodriguez, as she took in the wares for sale at the Mimbres Valley Harvest Festival on a recent Saturday. Featuring a pie contest and a petting zoo, it was a festive occasion for this community two hours northwest of Las Cruces; the fair was paused for two years because of COVID-19. But Rodriguez, leaning on her walking stick amid a row of ceramics vendors and voter registration booths, said politics in the area had become more divisive, and without the abortion debate, Democrats “would probably have a big, big problem.”

Rodriguez, a registered Democrat, is Catholic and personally sees abortion as “against God’s will.” But, the 80-year-old retired office worker said, it was not her business to decide if someone else should have the procedure.

“You never know people’s circumstances,” she said. “You say to yourself, ‘OK, I’m not the church. I’m not the judge.’”

Before the high court’s decision in Dobbs vs. Jackson Women’s Health Organization overturned national abortion protections in June, Democratic candidates were more likely to tiptoe around the issue. The assumption, held by strategists in both parties, was that Latinos skewed socially conservative and their religious faith shaped their antiabortion views.

That view misses some key nuances among Latinos like Rodriguez, said Fernand Amandi, a Democratic pollster based in Miami who specializes in the Latino vote.

“Hispanics are conservative on this topic personally, yes,” he said. “But they draw a line on having the government intervene.”

The Dobbs ruling pushed Latino Catholics more firmly in that direction, according to a survey by the Public Religion Research Institute. The poll, taken after the decision was released, found 75% of Latino Catholics said abortion should be legal in all or most cases, compared with 51% who held that view in 2010.

Many Latino opponents of abortion rights now identify as evangelical, the group of Americans most opposed to legalized abortion regardless of race or ethnicity, said Melissa Deckman, chief executive officer of the nonpartisan polling group.

The Dobbs effect has been most pronounced among Latinas, particularly those born in the United States, said Mike Madrid, a California-based GOP strategist and expert on the Latino vote.

“U.S.-born Hispanic women basically feel toward abortion the way that every other woman in the country does,” Madrid said.

Their mobilization had appreciable impact this August in the Kansas referendum on abortion rights. An analysis by TargetSmart, a Democratic analytics group, found Latinos showed up in near record numbers in the state, behind only their turnout for the 2020 presidential election; of that group, 62% were women.

While polling shows support for abortion rights, it is less clear whether the issue will outweigh Republican advantages on the economy and crime.

Sometimes the mixed signals can come from the same survey. An NBC News poll of Hispanic voters found that just 4% ranked it as a top issue this election, far behind matters such as the cost of living. But nearly a quarter of respondents said that a candidate’s stance on abortion could single-handedly determine their support.

Cristina Uribe, director of advocacy and political strategy at the Gender Equity Action Fund, said it is up to abortion rights proponents — and Democratic candidates — to make sure Latinos consider the Dobbs ruling in the voting booth.

“Polling is a thermometer; we need to be a thermostat,” actively pushing the temperature up, Uribe said.

Republicans believe they can capitalize on gains they made in the 2020 election, where President Biden’s lead among Latinos (59%-38%) was smaller than Hillary Clinton’s 2016 margin (66%-28%), according to a detailed study by Pew. In June, Rep. Mayra Flores, a Republican, won a special election for a historically Democratic House seat in south Texas, becoming the first woman born in Mexico to serve in the House.

More Latino GOP candidates filed to run this cycle than ever before, according to the national party’s accounting. The RNC has spent millions opening more than 30 community centers in Texas, Florida, Wisconsin and other key states and congressional districts.

Two of those centers are in Albuquerque and Las Cruces, opposite ends of New Mexico’s sprawling 2nd District. The district used to be a GOP stronghold, covering the rural southern half of the state. Through redistricting, the Democrat-led state legislature excised the conservative-tilting oil and gas producing region in the east and stretched the seat’s boundaries from the U.S.-Mexico border into parts of Albuquerque. It is now one of the most competitive seats in the country.

At the RNC’s center in Albuquerque, located in a strip mall next to a paleteria selling Mexican ice cream pops, street snacks and aguas frescas, Herrell, the district’s first-term congresswoman, acknowledged the challenging political lean of the new district, which backed Biden by 6 points in 2020.

“Many Hispanics in New Mexico are Democrat — not all,” she said. “But they also are concerned, feeling as if their party may have left them.”

Herrell said the abortion debate was less relevant in her race, given that New Mexico state law protects access to the procedure. (Last year, the state repealed abortion restrictions that were on the books before Roe, in anticipation of the Dobbs ruling.)

“What I’m seeing and hearing in New Mexico when I’m traveling the district is it is converging more to the economy side of things, more about the open border, crime, education,” said Herrell, a 58-year-old former state legislator.

Herrell’s GOP backers have flooded the airwaves with ads hammering her opponent, Vasquez, a former Las Cruces city councilor, as too liberal on taxes and public safety. Recent commercials focus on comments he made in a local TV interview at a 2020 Black Lives Matter rally, where he called for “police reform,” adding “it’s not just about defunding police, it’s about defunding a system.”

The attacks have stung; Vasquez released his own ad featuring a sheriff vouching for his support for law enforcement.

On air, Vasquez and his allies have emphasized Herrell’s support for the Life at Conception Act, legislation introduced in the U.S. House before the Dobbs ruling that would impose a national abortion ban, with no exceptions for rape, incest or protecting the mother’s health. On the ground, Vasquez’s pitch is more varied. In a recent visit to Silver City he told a roomful of Democratic faithful that a win for his party in November is essential for enshrining Roe vs. Wade into law.

“People say, ‘Oh, well, aren’t you a Latino? Aren’t you Catholic?… Aren’t you male?’ And I say, ‘Yeah, but I was raised right!’” he said to a burst of applause and laughs.

Canvassing for votes in a heavily Latino neighborhood in Deming earlier that day, however, Vasquez, 38, spoke about the economy instead of abortion. Conversing largely in Spanish, he spoke about how his family came from Zacatecas, Mexico, and built their lives in New Mexico. His congressional campaign, he said, was about ensuring opportunity for the next generation.

The approach aligns with recommendations from Equis, a political research firm specializing in Latinos that said in a recent memo that Democrats “run the risk of seeming out of touch” if they emphasize abortion ahead of economic concerns.

In Mimbres, Vasquez circulated among the harvest festival crowd before stopping at the cafeteria to introduce himself to some residents and sample the enchiladas. At the end of his table sat Gloria Jaime, who credited Vasquez for showing up to the event, even though the registered Democrat said she’s undecided on her vote.

She had a long list of issues that weighed on her: drugs, the need for more police, the economic prospects for her children. Jaime said abortion was unlikely to sway her.

“That’s a touchy issue,” said the 70-year-old retired school worker from Silver City. She didn’t like hearing politicians talk about it too much.

Still, considering the surge of energy Vasquez has seen from core supporters, he said, abortion is likely to remain central in the campaign’s final weeks.

“We still would have had a shot at this even if Dobbs didn’t happen,” he said in an interview. But, he added, since the June ruling, “I can say that there’s a palpable change on the ground.”

Top prosecutor on Barr’s investigation of the Russia probe just resigned out of fear of political influence: report
Chicago Police Boss Says Trump Made Up Cop Who Claimed He Could End Crime In A Day
What we know about the military dog injured in the al-Baghdadi raid