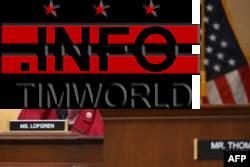 Washington —  The congressional panel investigating the riot at the U.S. Capitol on January 6 of last year is wrapping up its public hearings Thursday, pledging to present new evidence to show the scope of former president Donald Trump’s connection to the violence that day as he tried to upend his 2020 election defeat and stay in power for another four years.

The House of Representatives Select Committee’s hearing is expected to be its first without live testimony from new witnesses. But the panel’s chairman, Representative Bennie Thompson of Mississippi, said the nine-member committee plans to reveal “significant information that we’ve not shown to the public.”

FILE – U.S. Rep. Zoe Lofgren, a California Democrat, speaks during a hearing by the Select Committee to Investigate the January 6th attack on US Capitol, in Washington, June 13, 2022.

Another committee member, Congresswoman Zoe Lofgren of California, told CNN, “We discovered through our work through this summer what the president’s intentions were, what he knew, what he did, what others did.”

The hearing is unfolding less than a month before crucial nationwide congressional elections on November 8 in which the narrow Democratic political control of Congress is at stake and two years ahead of the 2024 presidential election, with Trump, a Republican, signaling he is likely to mount a new run for the White House against the Democrat who defeated him in 2020, President Joe Biden.

To this day, Trump falsely claims he was cheated out of a second four-year term in the 2020 election because of voting irregularities in several states he narrowly lost to Biden.

During earlier hearings, several aides to Trump and officials in his administration testified at the House panel’s eight public hearings in June and July that they directly told the then-president he had lost and that there was not any significant fraud that would have upended his defeat.

Some of the rioters, more than 800 of whom have been arrested in the 21 months since then, shouted “Hang Mike Pence!” a suggestion one Trump aide said the president thought was appropriate. Gallows had been erected on the National Mall within eyesight of the Capitol.

FILE – A video of President Donald Trump is shown on a screen, as the House select committee investigating the January 6 attack on the U.S. Capitol holds a hearing at the Capitol in Washington, July 21, 2022.

Trump is facing several criminal investigations stemming from his actions as he tried to remain in power, including a sweeping Justice Department probe into whether he helped foment the Capitol riot by urging his supporters to go there and “fight like hell” as lawmakers were certifying his Electoral College loss.

In the southern state of Georgia, a prosecutor in Atlanta, the state capital, is investigating Trump’s request to the top state elections official to “find” him 11,780 votes, one more than he needed to overturn his 11,779-vote loss to Biden.

The state-by-state vote counts are essential in U.S. presidential elections because the country’s leader is not elected by the national popular vote count, which Biden won by more than 7 million votes. Rather, the overall outcome is effectively determined in the Electoral College through state-by-state elections, with each state’s number of electors roughly determined by its population, with the biggest states holding the most sway.

The House investigative panel is expected Thursday to try to make the case that Trump remains a threat to American democracy because of his actions after the 2020 election leading up to the riot, when about 2,000 Trump supporters stormed into the Capitol, clashed with law enforcement, injured 140 police officers and ransacked congressional offices.

The committee has no power to bring criminal charges against Trump but could make a criminal case referral to the Justice Department in a final report it expects to complete before the end of this year. If Republicans succeed in taking control of the House starting in January, they would almost certainly disband the committee if it does not finish a report by then.

Since the last public hearings, the committee has obtained more than 1.5 million pages of documents and communications from the Secret Service, the presidential security agency, that include details of how agents blocked Trump’s attempts to join his supporters at the Capitol even after their assault on the national seat of government had already erupted.

Trump, after rallying his supporters near the White House to “stop the steal” of the election, angrily berated a Secret Service agent when he realized his security detail was taking him back to the White House, where witnesses say he watched on television for more than three hours as the riot unfolded.

Late on the afternoon of January 6, he told his supporters in the Capitol to leave.

“We had an election that was stolen from us,” he claimed. “It was a landslide election, and everyone knows it, especially the other side. But you have to go home now. We have to have peace.”