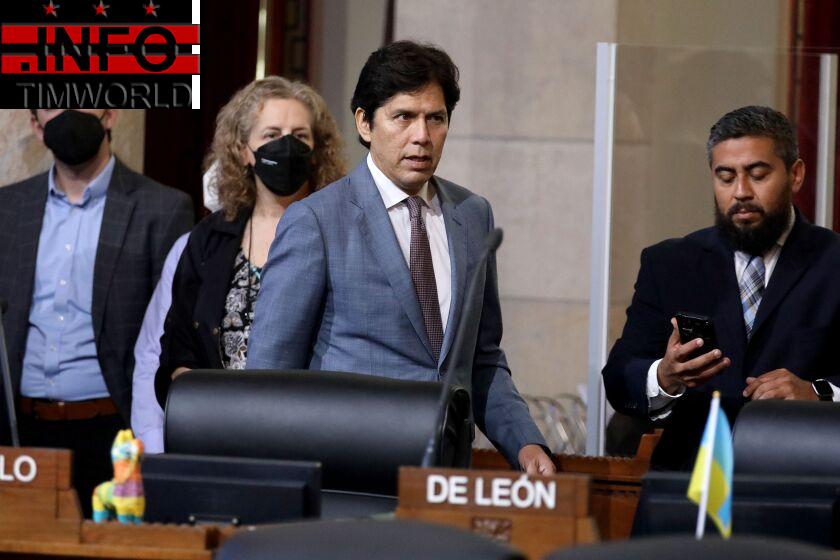 He ignored long odds and waged an uphill bid to dislodge fellow Democrat Dianne Feinstein from the U.S. Senate.

He barely warmed his seat on the Los Angeles City Council before throwing himself into the race for mayor.

Both efforts proved unavailing. But until De León was caught yukking it up on a recording filled with racist, homophobic, cruel and cutting remarks, neither setback seemed to have done him any great harm.

Few — much less De León — viewed the council as the zenith of his public career. There was talk of another statewide run, perhaps for lieutenant governor, a job that has been a stepping stone for two of California’s recent governors, including Gavin Newsom.

Now, shorn of power at City Hall and facing protesters camped out in his Eagle Rock neighborhood, the question is whether De León’s once-bright political future has gone the way of the Dodgers’ dashed World Series dreams.

On Wednesday, the 55-year-old councilmember broke a lengthy silence to reiterate his intention to stay in office. “No, I will not resign, because there is a lot of work ahead,” De León said in a Noticiero Univision interview.

That stubbornness doesn’t bode well for his future.

By brazening it out and refusing to quit, De León may be hoping not just to hang on to his council seat for another two years but preserve his chances for bigger and brighter things beyond City Hall.

Good luck with that.

“I don’t think anything is impossible in politics,” said Bill Carrick, a longtime Democratic strategist and Feinstein advisor. “But it would be very, very difficult.”

There are plenty of politicians who’ve weathered knee-buckling scandals and, after righting themselves, gone on to prosper. Bill Clinton. John McCain. And, not least, Donald Trump.

As San Francisco mayor, Newsom was reelected after a particularly sordid episode involving an extramarital affair with the wife of a friend and longtime aide. Newsom — months away from seeking a second term — acknowledged his wrongdoing, apologized and said he would seek counseling for alcohol abuse.

“Never underestimate the public’s ability to forgive if you ask for that forgiveness and they believe you’re sincere about it,” said Roger Salazar, a Democratic consultant who served as spokesman for De León’s Senate campaign.

Of course, not all political scandals are the same. Some involve personal lapses, which may be salved with a show of humility and contrition. Others stem from a misuse of public assets, a breach of trust or an act of hypocrisy — though, really, is it all that shocking for a politician to say one thing and do another?

The scandal darkening Los Angeles City Hall is of a different order.

The bigotry and casual venom surreptitiously captured on tape, which led to the resignations of council President Nury Martinez and labor leader Ron Herrera and which shredded the reputations of De León and fellow Councilmember Gil Cedillo, was uglier and more damaging than some mere personal transgression.

“This was an attack on a whole community,” Carrick said.

Like a poisoned smorgasbord, there was something on the recording to turn every stomach. There was also plenty to offend members of several key Democratic constituencies, among them Latinos, women, Jews and, especially, Black voters.

The what-about chorus will bring up former President Trump, who withstood countless controversies to win the White House and has, on various occasion, emitted something to offend to virtually every man, woman and child on Earth.

“We’re Democrats. We’re supposed to be better than that,” said a party strategist in Sacramento, who wished not to be identified so her political clients wouldn’t be dragged into the City Hall muck. “If you’re going to call out people on a regular basis, you can’t accept that kind of racist conversation and behavior from one of our own.”

“People believe in redemption,” said a former state legislative leader who worked closely with De León in Sacramento and asked not to be named to preserve their personal relationship. “But if you’re trying to ride it out… it’s hard to get redemption when there’s no meaningful effort or apology.”

On Wednesday, De León did say he was sorry.

“I apologize to all my people, to my entire community, for the damage caused by the painful words that were carried out that day last year,” De León said in the interview with Noticiero Univision anchor León Krauze.

“I come to you with a shame deeper than I have ever known and from a place of deep humility,” De León wrote, adding he intended to “spend every waking moment working to heal the pain and damage this moment has caused and apply the lessons I’ve learned.”

But that was as far as he went, which fell short of what many prescribed.

Once he quit and apologized, political operatives agreed, De León should disappear for a while. Do good work for some of those in the communities he offended. Keep out of the public eye, and forget about mounting a political comeback anytime soon.

“Don’t resign from the council one day and then three days later announce you’re running for something else,” said Democratic consultant Garry South.

Right now De León’s political designs should be the least of his considerations.

When he launched his Senate bid in 2017, De León attacked Feinstein for suggesting early in Trump’s term that maybe the petulant and mean-spirited president would grow and become a better man.

“We can’t cross our fingers and hope that Trump can learn and change,” De León said, chiding Feinstein for harboring false hopes.

He was right. Trump never did learn and change.

Maybe De León can do better.