Column: Justin Fields apologized to Chicago Bears fans. It was mature and sincere — but also unnecessary. 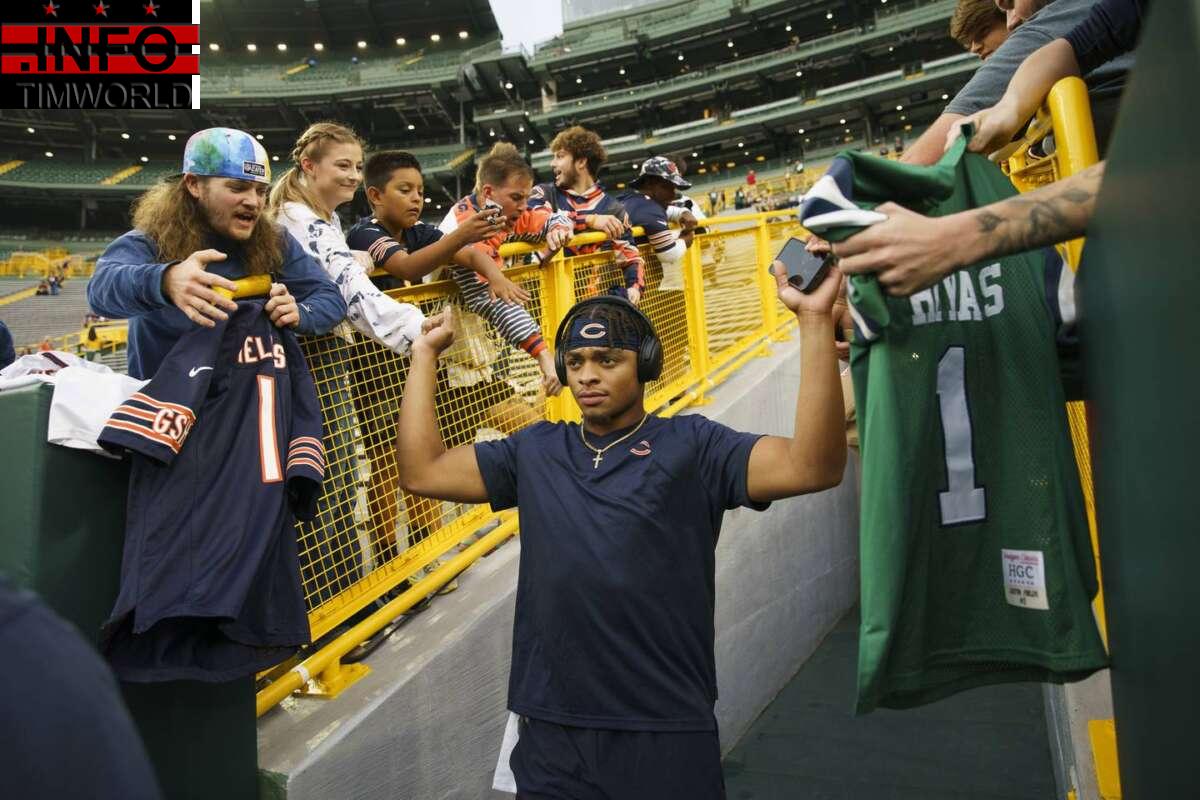 Ninety seconds into his postgame news conference Sunday night at Lambeau Field, Justin Fields was thrown a slow-breaking curveball, one he wasn’t quite prepared for as he digested the Chicago Bears’ 27-10 loss to the Green Bay Packers.

Reporter: Losing against this team, does it sting more because of the rivalry and you know how much Bears fans want to win this game?

Fields: Yeah. I mean, it hurts more in the locker room than for the Bears fans. At the end of the day, they’re not putting in any work. I see the guys in the locker room every day. I see how much work they put in. So just coming out with a disappointing loss like this, it hurts. Now we just have to respond.

Seemed innocuous. Pretty harmless. Enough so that Fields didn’t receive a single follow-up question about it. His postgame Q&A session continued with a query about what is missing in the Bears passing game.

Fields was simply trying to express that no fan could care more about the Bears winning than he did. Thus it would be impossible for Sunday night’s result to sting more after another loss in one of football’s most storied rivalries.

[ [Don’t miss] Chicago Bears Q&A: Do the coaches doubt Justin Fields as a passer? What is with Kyler Gordon’s rookie struggles? ]

Little did the second-year quarterback realize he had inadvertently kicked a hornet’s nest, disturbing a swarm of long-suffering Bears fans who felt their quarterback took a dig at them.

They came out buzzing. On social media, Fields was lambasted for having the audacity to call out fans. On sports talk radio, there was passionate debate about whether Fields had earned the stature to take even a passing jab at fans.

The hullabaloo intensified. Fields felt the sting. In the made-for-meme world of 2022, his comments were lifted and packaged in a handful of social media posts that amplified — or maybe manufactured is the better verb — a mini-controversy.

Fields cited a tweet from Barstool Sports that included a video of his comments and concluded that “Bears fans might not like this one from Justin Fields.” As of Wednesday afternoon, that post had more than 1,100 retweets, 2,400 quote tweets and 26,200 likes.

During his regular weekly session at the Halas Hall dais Wednesday, Fields offered a lengthy apology and clarification.

“First off, I was frustrated after the game,” he explained. “Number one, I didn’t want to talk to (reporters). I wasn’t in the mood to come and talk. … So I should’ve done a better job of explaining what I meant by that.”

“What I meant by that is I’m talking about work (that was put in) regarding the game on Sunday and winning the game. I don’t know any fans. I don’t know what they’re doing in their personal lives. I respect every fan we have. I’m glad that we have fans. I would never disrespect anybody on what they do or what they love to do. And it came off like that.”

Let’s be real here: Fields’ apology was as unnecessary as it was sincere. Those who reacted with vitriol and bubbling outrage to his postgame comments probably should offer themselves up with a side of pasta and some grated Parmesan down on Taylor Street.

I asked Fields how he became aware of the backlash. He smiled.

“I was getting tagged in a bunch of stuff (on social media),” he said. “The fans definitely let me know, for sure. Again, I didn’t mean it to come off like that.”

[ [Don’t miss] QB rewind for Week 2: How can Justin Fields and the Chicago Bears unlock their offense? ]

I also wondered how Fields was learning to handle some of these unexpected annoyances that will continue popping up given his role as the face of one of the NFL’s charter franchises.

In addition to studying the intricacies of defenses, Fields also has the responsibility of becoming a smooth public speaker and a responsible voice for the Bears.

“I talked to my dad about it,” he said Wednesday. “And as long as I’m going to be in this position, there’s always going to be stuff like that that pops up. (It’s) just knowing that as long as I’m in this profession, it’s really never going to go away. So I just have to either be really clear with everything I say and be really descriptive of what I really mean or just not say anything.”

Chicago should hope Fields opts for the former. A sputtering franchise can ill afford to become boring too.

Let’s not get it twisted. Fields has much bigger fish to fry — namely awakening a somnambulant passing attack that has produced an NFL-worst 153 yards through two games. So the 190 seconds he spent Wednesday performing damage control for his postgame comments were about 175 too many.

Still, give him credit. At 23, his contrition was a showcase of grace and maturity mixed with an acknowledgment that he’s young and learning — across so many phases of his QB1 job.

Fields’ place in Chicago ultimately will be defined by how he develops his pocket poise, how he processes what he’s seeing from defenses and how many big plays and signature wins he produces.

But he also realizes he’s sitting on a golden opportunity to win over a passionate sports city. And he doesn’t take that for granted.

For now, Fields said, he’s trying to balance being candid and colorful without creating commotion.

[ [Don’t miss] Is the Chicago Bears passing game broken? Brad Biggs’ 10 thoughts on the 27-10 loss to the Green Bay Packers at Lambeau Field. ]

Some will be big, game-changing errors on the field. Some will be annoying little missteps away from it. All of them will push Fields to grow.

The deep agitation Fields felt after Sunday’s loss in Green Bay should be something Bears fans appreciate. Of Fields’ nine defeats as the Bears starting quarterback, he said something about Sunday’s “hit different than all the losses last year.”

He knows how much investment Bears players are putting into the grind to help change a stumbling franchise’s fortunes. And when that work isn’t backed by results, it’s deeply aggravating. Especially against the Packers.

On that, the quarterback and Bears fans share similar emotions. The next step, of course, is for Fields to make rapid improvements to change those results. But he also shouldn’t be under siege or put on the defensive simply for expressing frustration clumsily 40 minutes after a rough loss.

His apology Wednesday was genuine and appreciated. It also wasn’t necessary.

Eagles look to stay balanced on offense
The Eagles are better off with Jalen Hurts rather than Carson Wentz, and the reasons run much deeper than a bad day during the first week of training camp, writes @Mfranknfl
Mets star Robinson Canó is back on the injured list.