Column: Chicago Bears QB Justin Fields says ‘my job is not to call pass plays’ after attempting only 11 passes in a lopsided loss 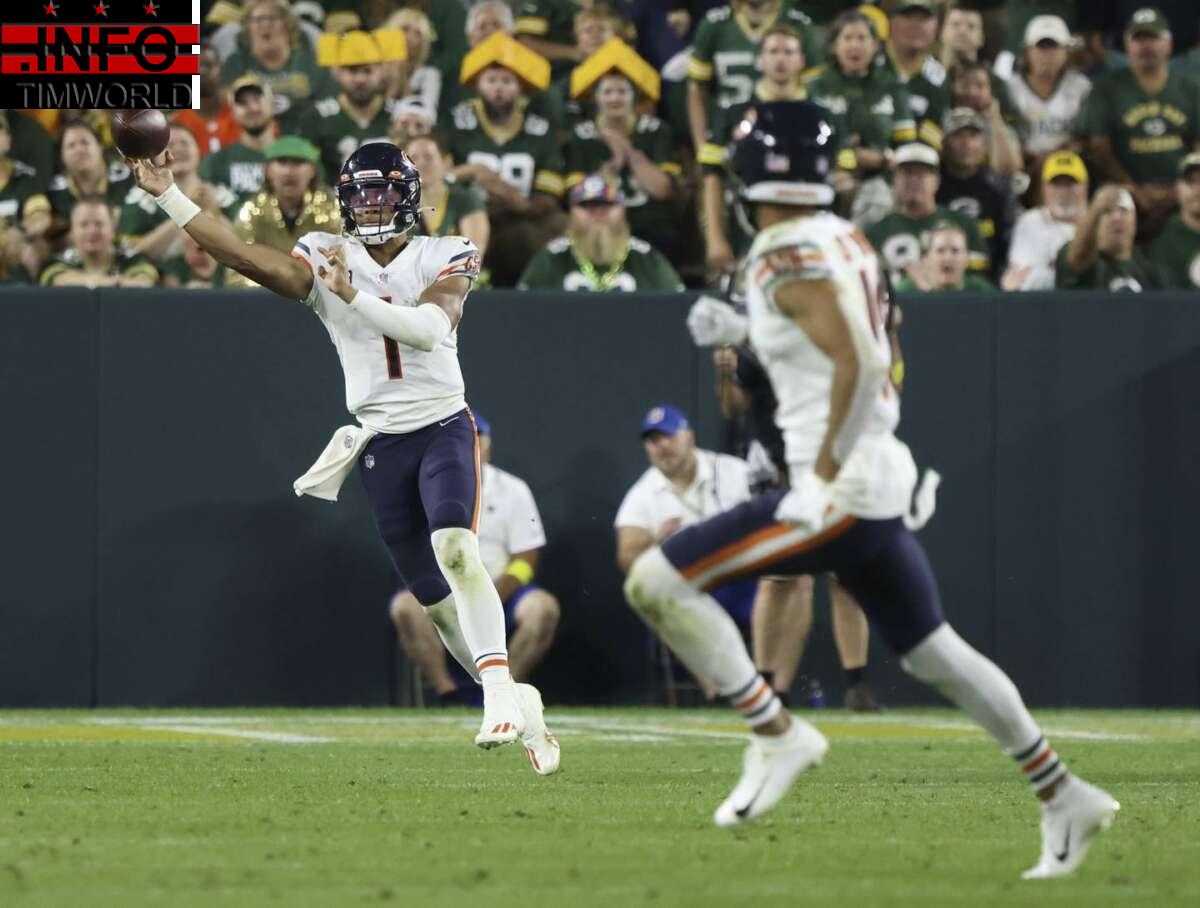 Matt Eberflus reinforced the obvious Wednesday afternoon before the Chicago Bears went back to work on the practice field at Halas Hall.

The offense needs to achieve balance with play distribution if it’s going to have any chance to get rolling.

“I don’t think that’s really a force issue,” the coach said. “That’s what we need to have. We need to have balance in your offense, in the run/pass calls, and we’ll get that.”

The Bears attempted only 11 passes Sunday in a 27-10 loss to the Green Bay Packers, only the second time since the beginning of the Mike Ditka era in 1982 the team put the ball in the air less than 13 times.

An offense that had a critical lack of explosive plays in 2021 has picked up where it left, and while the sample size is small, the start does not paint a picture of progress. Here’s where the Bears offense ranks after two games:

The only thing the Bears can hang their hat on: They rank eighth in the league in rushing. If you didn’t know better, you might wonder if they are fixated on playing checkers while everyone else is playing chess.

Quarterback Justin Fields said he is “changing up his whole routine” after the latest loss gnawed at him. He said he’s waking up at 5:45 a.m., about an hour earlier than usual, and spending even more time in preparation.

Fields didn’t criticize offensive coordinator Luke Getsy, who speaks with the media on Thursdays, after getting so few chances to throw the ball in a game in which the Bears trailed by two scores or more for 34 minutes. But was it a sign the staff lacks faith in Fields as a passer?

“I don’t think so,” Fields said. “Our run game did a great job on Sunday.

[ [Don’t miss] QB rewind for Week 2: How can Justin Fields and the Chicago Bears unlock their offense? ]

With so few pass attempts — the San Francisco 49ers are 31st in the league with 52, 24 more than the Bears — wide receiver Darnell Mooney has been an afterthought. He has been targeted five times and has two receptions for 4 yards. Tight end Cole Kmet hasn’t caught a pass.

That’s fair. But Fields surely watches other games around the league and sees how offenses are attacking and challenging defenses. Those who have found unique ways to defend the Bears’ offensive approach for years will remind you the opener against the 49ers was played in a driving rainstorm. That’s true. The offense then threw six fewer passes Sunday on a perfect evening for football at Lambeau Field, and you have to go back to 1978 to find the last time a team attempted only 28 passes through two games.

Bears quarterback Justin Fields celebrates after scoring a touchdown during the first quarter against the Packers at Lambeau Field on Sept. 18, 2022. (Armando L. Sanchez / Chicago Tribune)

The only way Fields is going to grow as a passer and develop better timing is to — you got it — throw the ball.

“Yeah, maybe,” he said. “But my No. 1 priority in my job is to run the plays like I’m taught to and to execute them at the best of my ability and to ultimately win games. So if our offensive coordinator thinks the plays he’s giving me are going to help us win games, that’s all I care about.”

Fields was engaging Wednesday and seemed eager to share how much the loss to the Packers bothered him. He didn’t criticize anyone else — also a smart move — and made it clear he’s doing his part to help work the offense out of an early but deep rut.

“I have more time during the day,” he said. “Just being able to study more, being able to look at our stuff more. I think that’s going to, just those little tidbits of being able to process stuff more and being able to take in more stuff, is just going to allow me to be better prepared for Sunday.”

Perhaps that will lead to a little balance for an offense that already is out of sorts.