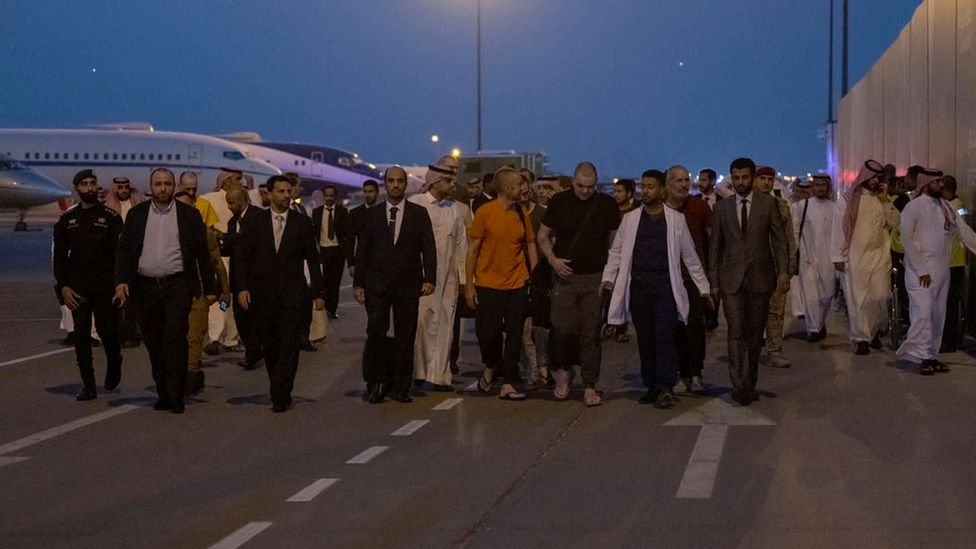 Watch: We got out by the skin of our teeth – freed Briton

Five British nationals held by Russian-backed forces in Ukraine have been freed.

The news ended “months of uncertainty and suffering for them”, UK Prime Minister Liz Truss said.

Saudi Arabia said it had brokered an exchange between Russia and Ukraine of 10 detainees, including five Britons.

Aiden Aslin, John Harding and Shaun Pinner, who were captured while fighting with Ukraine forces, were among those released.

Photos have emerged showing the three detainees arriving off a plane in Riyadh, Saudi Arabia, appearing to be accompanied by a group of Saudi officials.

The images have been seen by family and friends of the Britons who feared that they would be killed.

As recently as Tuesday, rumours on social media began circulating that the death sentence they have been facing had been carried out.

In a video recorded from the plane on the way home to the UK, Mr Aslin said they were “now out of the danger zone and on our way home to our families”.

Mr Pinner added they had escaped “by the skin of our teeth”, while both thanked people who had been supporting them while they were in captivity.

Mr Aslin, from Newark, Nottinghamshire, was held in April with Mr Pinner, from Bedfordshire, while fighting in the south-eastern city of Mariupol.

Both men and a Moroccan national, Brahim Saadoun, were put on trial in the self-declared Donetsk People’s Republic and told they faced the death sentence. Mr Harding, from Sunderland, was one of several others who were awaiting trial.

The three Britons had all been living in Ukraine when Russia launched its invasion in January this year.

Mr Saadoun is also seen in the pictures released by the Saudi Press Agency.

“They’ve been through months of torture, strain and stress as a result of this,” the MP for Newark said, describing the trial as a “kangaroo court”.

Mr Jenrick said that though he “can’t divulge all of the details” of the negotiations, a “huge amount of effort” had gone into securing their release.

He said Ukraine’s President Volodymyr Zelensky personally supported the efforts and “we owe him a real debt of gratitude”.

The identities of two UK citizens freed remain unknown. The UK government has not confirmed details about any of the British nationals or the process that led to their release.

A Briton providing humanitarian assistance in Ukraine, Dylan Healy, from Cambridgeshire, is also known to have been held by Russian-backed forces. He was detained in April alongside Paul Urey, from Warrington, who later died in detention.

Foreign Secretary James Cleverly welcomed the release of the British nationals but added: “Tragically that was not the case for one of those detained and our thoughts remain with the family of Paul Urey.”

In a statement, Saudi Arabia said Moroccan, US, Swedish and Croatian nationals had also been freed as “part of an exchange of POWs between Russia and Ukraine”.

Saudi Arabia said the detainees had been transferred from Russia to Saudi Arabia and it was organising their return to the respective countries.

The sudden announcement by the Saudi Ministry of Foreign Affairs of the prisoners’ release came as a surprise to many, including their families. It’s believed to have been a personal initiative of the Saudi Crown Prince and de facto ruler Mohammed Bin Salman.

Until now, the Saudis have kept a low profile over the Ukraine conflict.

They may be a strategic ally of the US but they have a strained relationship with the Biden administration and they are reluctant to upset Russia.

When the Saudi Crown Prince attended the G20 summit in Buenos Aires four years ago he was shunned by western leaders who suspected him of authorising the murder of the Saudi journalist Jamal Khashoggi, which he denied.

However, one leader there greeted the Saudi Crown Prince effusively with a high five gesture. That leader was Vladimir Putin and the Saudi prince won’t have forgotten that.

As he now seeks to shake off something of a pariah status in the West he appears to have leveraged his Russian connection to good effect and to western gratitude.

Ms Truss thanked Ukrainian president Zelensky “for his efforts to secure the release of detainees, and Saudi Arabia for their assistance”.

She added: “Russia must end the ruthless exploitation of prisoners of war and civilian detainees for political ends.”

The release of 10 foreign nationals – including five Britons – held by Russian-backed forces in Ukraine prompts a question: why now?

Negotiations about their fate have been going on for months. So why did the Kremlin choose today to sign off on a deal – on the same day that Vladimir Putin announced a partial mobilisation of military reservists and rattled his nuclear sabre?

Was Russia’s President trying to sow confusion among world leaders meeting at the United Nations in New York, threatening on one hand, offering a gesture of goodwill with the other?

Diplomats said it was impossible to know if the two issues were linked. But they said at the very least the Kremlin wanted to change the narrative, to try to seize some kind of initiative after weeks of being on the back foot as it lost territory to Ukraine.