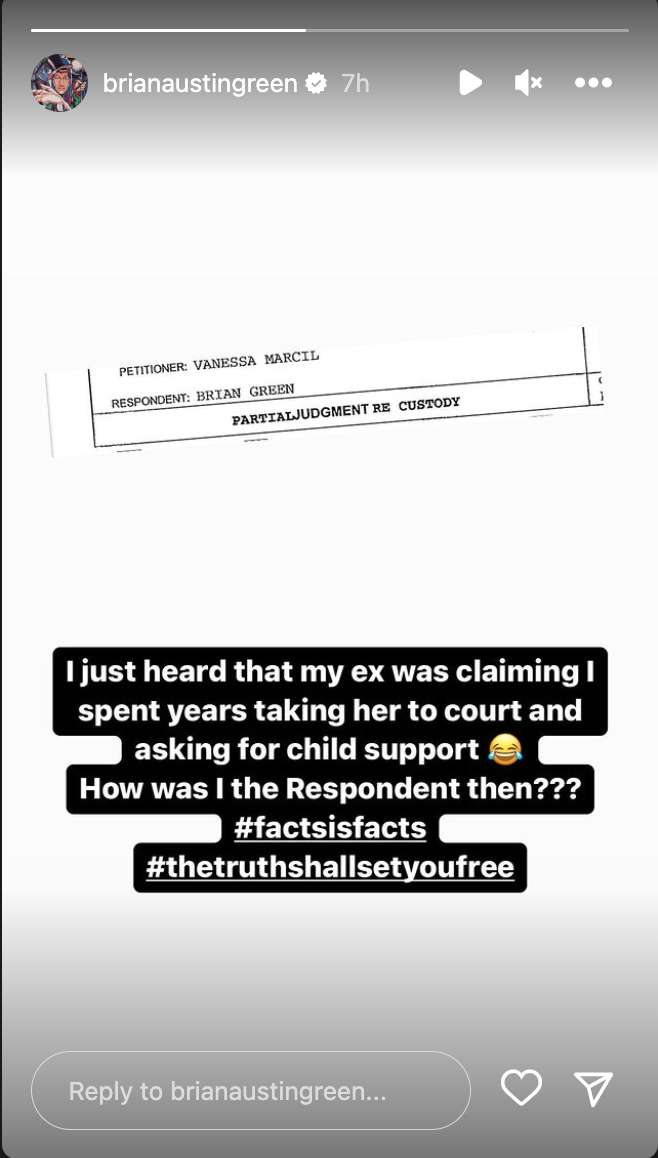 Brian Austin Green is speaking out in response to an alleged custody claim by his ex, Vanessa Marcil.

“I just heard that my ex was claiming I spent years taking her to court and asking for child support,” the 49-year-old actor wrote on Thursday via his Instagram Stories. “How was I the Respondent then??? #factsisfacts #thetruthshallsetyoufree.”

The Beverly Hills, 90210 star included a screenshot of court papers that appeared to show Marcil, 53, listed as the petitioner and Green as the respondent.

The former couple shares a 20-year-old son, Kassius, from their four-year relationship. Green and Marcil split in 2003.

In an interview with ET in July, Green joked about being done having kids.

“I mean, I have five kids, and we joke about the fact that I had a I already had a station wagon [before Zane], so now I have [to get] a Yukon Denali,” Green quipped. “If I have another one, then I’m moving to like a school bus or something.”

“How do you travel? Like, you know, going into a restaurant asking for a table for seven, it all starts becoming a little much,” he added. “So I think I’m done at five.”

While he seemed confident in that being the right number of kids, Green didn’t set it in stone, adding, “I’m not saying never, you notice, I’m saying, ‘I think.’ And there’s a lot that can come from thinking. There’s a lot of room for change within that.”

As for his adorable baby boy’s relationship with Green and Fox’s young sons, the actor said that they’ve all been very harmonious, even before the baby was born.

“It’s just been really smooth sailing,” he added with a smile. “It’s been great.”