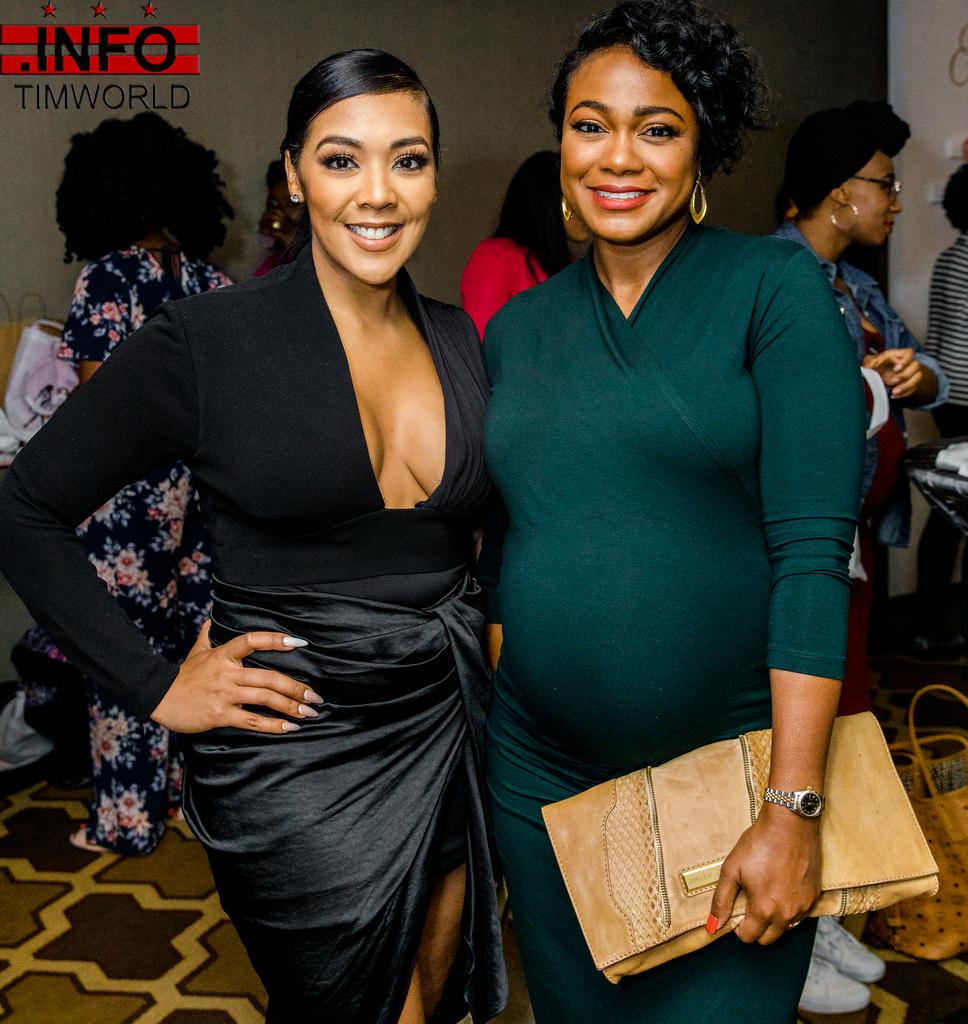 By Lenore T. Adkins, Special to the AFRO

When actress Tatyana Ali faced isolation as a new mom in a new city —San Francisco — she realized she had to find her own community of mothers.

“San Francisco’s wonderful, it’s very liberal, but it’s very segregated and so on the playground, you know, listening to other moms talk, I found that in some cases, I didn’t necessarily fit in with the moms that were there. And I didn’t necessarily fit in with the nannies that were there,” says Ali, 40, who has a two-year-old son and is expecting her second child in August. “I was somewhere in between I guess, or at least to some people that’s how they saw me.”

Actress and TV host Khadeen Ellis standing next to actress and singer Tatyana Ali at the Momference on May 18 at the Renaissance in Downtown Washington, D.C. (Courtesy Photo)

Ali, known for playing the beloved Ashley Banks on the 1990s sitcom “The Fresh Prince of Bel-Air,” found her mommy tribe by going to different parks and finding other like-minded moms. She used FaceTime to stay in constant contact with longtime girlfriends.

“Even if you’re in a segregated place, and you’re the only one there, there are cool gems of people in all of those places and I just didn’t stop until I found what I needed,” Ali said.

Ali, a Harvard alum, made her comments Saturday at the one-day Momference, billed as America’s first full-day conference centered on millennial moms of color. The sold-out event took place at the Renaissance Downtown D.C. hotel and attracted nearly 500 moms, including ticket holders, vendors and speakers.

Nikki Osei-Barrett and Simona Noce Wright, cofounders of District Motherhued that supports millennial moms of color in the DMV, created the Momference to celebrate Black mothers because they couldn’t find a conference that exclusively caters to them. The event embraces Black mothers, addresses their needs and shows them in a positive light. Beyond the conference, 80 moms met up Sunday morning for rooftop trap yoga and brunch.

“Black motherhood always looks like just struggle and stress and anger and poverty, when in fact, it’s not,” Osei-Barrett says. “And the Momference is an opportunity for us to really display Black mom magic and just gather a room full of affluent, gorgeous, educated Black women … and put that on a platform.”

At the event, moms met and networked with other moms, pampered themselves, shared their struggles and learned from experts about monitoring their physical and emotional health.

According to the Centers for Disease Control and Prevention, Black women in the United States are three to four times more likely than White women to die of pregnancy complications, regardless of income or education.

Tausi Suedi, now the maternal and child health deputy director of centralized intake at the Baltimore City Health Department, said she didn’t feel like her doctors at another facility listened to her when she was beginning contractions with her first child.

She recalls telling her doctor, who was out of town, that the child was too big, and he authorized a Caesarean section. But the doctors onsite kept her in labor for two days, and she nearly died from the experience, she said.

Her advice is to fight back against the culture of blindly taking doctors’ advice, and to instead speak up if something doesn’t feel right, or if you’re in pain. If you aren’t in a position to do that, have your doula do it for you.

“Those theories are there that Black women have a higher threshold for pain, but that’s not necessarily the case,” says Suedi, a panelist on the conference’s panel that focused on maternal health, wellness and loss. “You know, for me to be in labor for two days because the doctors weren’t listening, and nearly dying, that was unacceptable.”

Helena Andrews-Dyer lives in the gentrifying Bloomingdale community and identifies with Ali’s struggles to find black moms in her neighborhood. The young white mothers Andrews-Dyers meets at the playground or the yoga studio don’t share her same concerns about motherhood, so being surrounded by women who look like her and have the same interests makes her feel like she’s not alone.

“Being around those women gives me strength,” says Andrews-Dyer, 39, who has a two-year-old daughter and is expecting another girl.

Meanwhile, this year’s Momference sold out in two days, and the inaugural Momference also sold out the year before. Organizers are figuring out how they’ll meet the demand next year — ideas include selling more tickets or adding another day to the conference.

That the event continues to sell out is a testament to how much it’s needed, Osei-Barrett says.

“You create experiences for Black women, we show up,” she told the AFRO.

Roger Stone thanks Donald Trump for ‘saving his life’ after prison sentence commuted
Angelina Jolie takes a break from ‘The Eternals’, soaking up the sun with her kids at the beach
Massive blaze erupts behind Karachi University