Black, Hispanic adults more likely to be hospitalized with flu than white adults 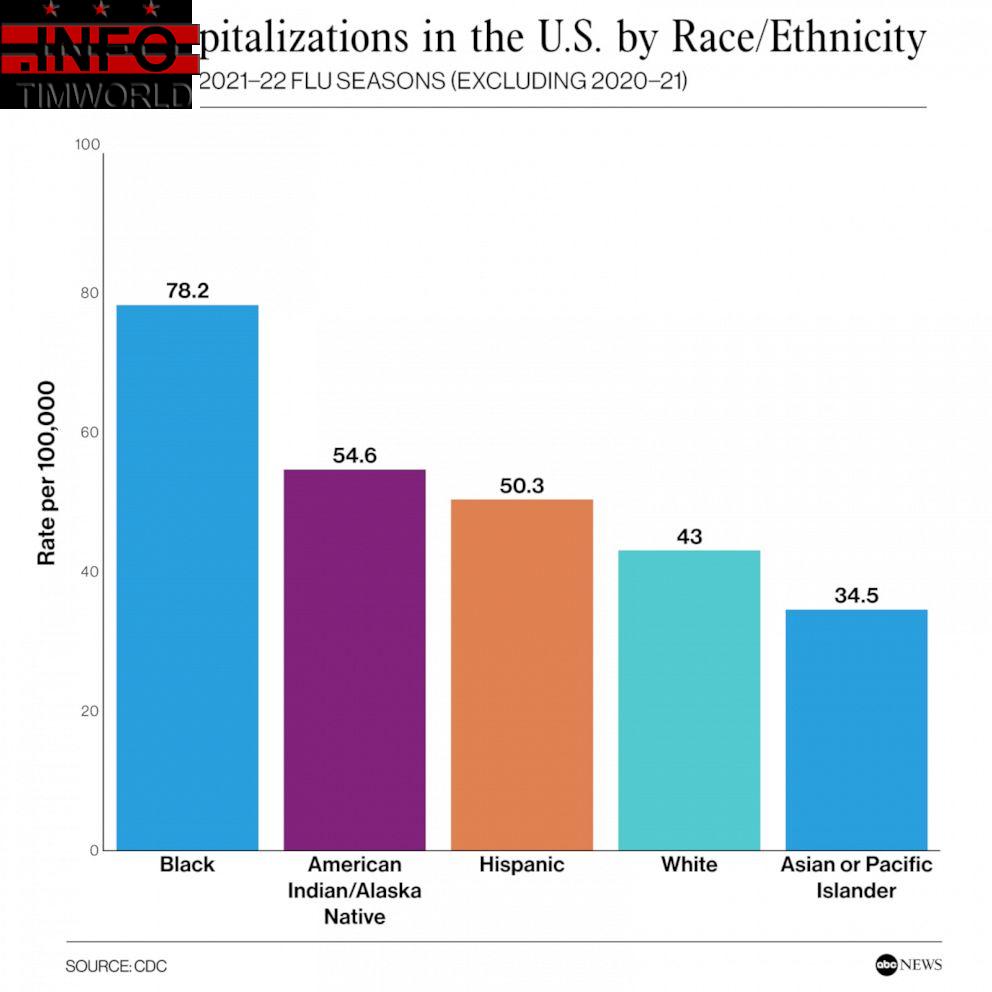 Racial and ethnic minorities are more likely to be hospitalized with the flu in the United States, new federal data shows.

MORE: What Australia’s flu season could foreshadow in the US this fall

They found that compared to white adults, influenza-related hospitalizations were 80% higher among Black adults.

Although there was some variation by season, during most season, hospitalization rates for Black adults were between 1.5 and 2.4 times the rates among white adults.

Meanwhile for Hispanics, the highest rates were seen during the 2009-10 and 2021-22 seasons and were 2.1 times those of their white counterparts.

Although experts say flu vaccination is the best protection against the flu, rates are lower among racial and ethnic minorities.

MORE: Flu cases on the rise as US prepares for possibly severe season, data shows

“Unfortunately, flu vaccination rates have been consistently lower among black, Hispanic, and American Indian, Alaska Native adults in the United States since 2010.”

Asian and Pacific Islander adults had the highest rate of vaccination at 54.2%.

According to the CDC, there are several reasons for racial and ethnic disparities, including lack of access to health care and insurance, which in turn leads to less vaccine access.

Another reason for the disparities is missed opportunities to vaccinate.

“For adults who reported a recent medical checkup, vaccination coverage was still lower for Black, Hispanic, American Indian and Alaska Native and adults of other races than for white adults,” Dr. Carla Black, an epidemiologist from the CDC’s Immunization Services Division, said during the press conference. “This suggests that health care providers are missing opportunities during routine medical appointments to vaccinate people from certain groups.”

She added there may be misinformation about how serious flu is and vaccine safety as well as distrust due to past racist health policies that have negatively affected America’s communities of color.

CDC officials recommend that doctors encourage their patients, including those of color, to get the flu shot and that public health officials host outreach evens including town halls and pop-up clinics to increase turs tans access to flu vaccines.

Black also encouraged flu vaccination due to the risk of a potentially severe flu season this year after the U.S. had two years of little to no flu activity:

“Well, what we can so far is that we’ve had mild flu season, and this means we might be ripe for a severe season, because people are not, you know taking all the measures they took for COVID which also had an impact on flu like masking and social distancing,” she said. “People haven’t had natural disease in two years. So, you know, there’s less natural immunity out there. People are going back to work. People are traveling again; all of these factors could contribute to us having a more severe flu season.”