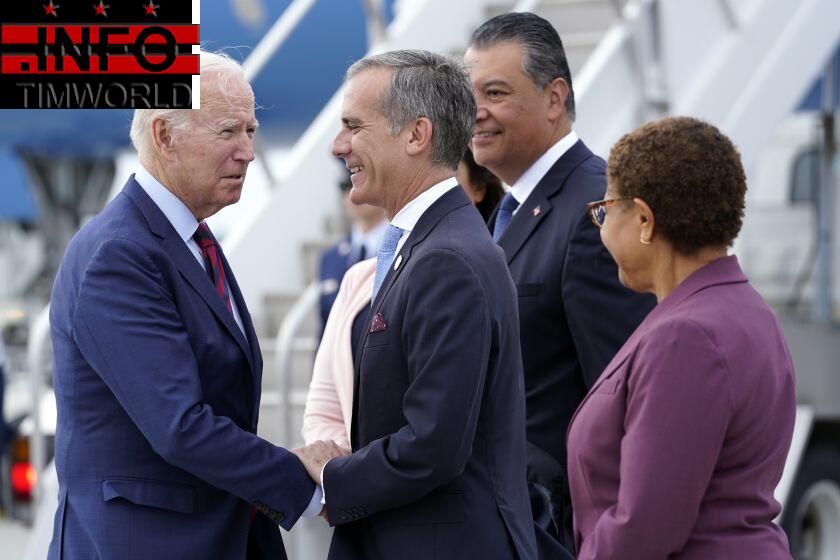 President Biden stood at the edge of a bridge with Pennsylvania Senate candidate John Fetterman on Thursday and talked mostly about the bridge.

The structure, which partially collapsed in January and was rebuilt with $25 million in federal funds expedited after the passage of last year’s bipartisan infrastructure bill, served to illustrate the president’s argument before next month’s midterm election: Democrats have done big things to improve Americans’ day-to-day lives.

The January bridge collapse occurred on the same day Biden was visiting Pittsburgh to talk about infrastructure.

“It never should have come to this,” Biden said, lamenting that past administrations hadn’t acted to improve the nation’s roads and bridges.

The $1.2-trillion infrastructure overhaul amounts to “the most significant investment in American infrastructure … since Eisenhower’s Interstate Highway System,” Biden said. The funds, he explained, allowed Pennsylvania’s governor to speed up repairs of the bridge, which is due to reopen in December, much earlier than the two to five years typically required for such a reconstruction project.

“By Christmas, God willing, I’m coming back to walk over this sucker,” Biden said. “This really matters. Folks in this neighborhood rely on this bridge,” he continued, noting that the project led to the creation of 100 jobs. “This law is about more than rebuilding our infrastructure. It’s about rebuilding the middle class.”

Although Biden recognized Fetterman briefly upon taking the stage, the event beneath the Fern Hollow Bridge in the city’s East End marked a continuation of the president’s above-the-fray midterm strategy. Eschewing larger campaign rallies, the president is using more understated official events to promote what he and Democrats have accomplished. He aims to boost his party’s midterm chances by drawing contrasts on policy rather than by leveling more specific attacks on individual GOP candidates.

“Thank you very much for running,” Biden said to Fetterman, who greeted him at the airport and sat in the front row for his speech. That was one of only a few passing references to Fetterman, who accompanied Biden on a surprise visit to Primanti Brothers, a well-known local sandwich franchise, and then flew with him aboard Air Force One to Philadelphia, where the two held a fundraiser.

The trip marked Biden’s first visit in recent weeks to any of the six states with the most hotly contested Senate races, and his closest campaigning to date with a Democratic candidate in a marquee race. On a four-day western swing last week, the president skipped Arizona and Nevada, both home to top-line Senate races, to instead campaign in Colorado, California and Oregon.

Pennsylvania, Biden’s birthplace, is a different story. Born in Scranton, he’s run ads for decades in the Philadelphia television market that reaches parts of his adopted home state of Delaware. His victory here in 2020, which helped secure the presidency, resulted in part from a unique appeal to working-class voters. And, as he noted as he spoke beneath a massive yellow crane, this visit marked his 19th trip to the state since taking office.

“He’s a little easier fit here than perhaps in some other states,” said J.J. Balaban, a Democratic political consultant in Philadelphia. Biden, who isn’t shy about using his Scranton roots as a cultural signifier, ran ahead of most Democrats on the statewide ballot in 2020.

“There’s just a certain cultural fit. There’s some affection for him,” Balaban said. “There are enough people that like the cut of his jib that it’s still a net positive and makes him an acceptable face of the Democratic Party.”

Fetterman, unlike some Democrats in other top-line Senate races, looks to be losing momentum in the final weeks of the campaign, beset by nagging questions about his health after a stroke earlier this year.

When Fetterman’s disability after the stroke became a matter of debate this month after he used closed captioning to take questions during on-camera interviews, the White House — often wary of talking politics in the briefing room — vouched for his ability to serve in the Senate. Press Secretary Karine Jean-Pierre told reporters Monday that Biden, after several recent conversations with Fetterman, “has found him to be an impressive individual … who’s just as capable as always.”

After a number of early gaffes, Republican Mehmet Oz, the former TV doctor backed by President Trump, has closed what had been a double-digit deficit, attacking Fetterman with a barrage of TV ads accusing him of being soft on crime.

According to the FiveThirtyEight average of polls, Fetterman leads Oz by 5 percentage points. But the two most recent surveys of the race, both by GOP pollsters, showed Fetterman’s lead at 2 points.

Fetterman, making a play for more moderate Republicans who didn’t back Oz in the primary, has run TV spots featuring testimonials from GOP voters explaining why they’re backing him. Another ad acknowledged the biggest liability for Democrats: the economy, which he says “is a mess because of Washington.”

Fetterman, who did not speak during the event at the Pittsburgh bridge, did address what he called “the elephant in the room” at the fundraiser, which reporters attended but were barred from recording.

Acknowledging that his recovery is ongoing and that he will sometimes “miss a word or … mush two words together,” Fetterman criticized his opponent, a doctor who has hosted a television show, for making such an issue of his health.

“Dr. Oz never lets me forget that I had a stroke,” Fetterman said, according to reporters who were in the room.

Declaring that he would win the election, Fetterman said: “In January I’ll be feeling much better, but Dr. Oz will still be a fraud.”

Biden, who spoke Wednesday about inflation and announced another release from the nation’s emergency oil reserve in hopes of adding enough supply to avert another spike in gas prices, has focused much of his campaign season travel on what he and Democrats in Congress have done.

But even after enacting several major pieces of legislation, Biden and Democrats are struggling to get voters to look beyond the current economic pain enough to appreciate the long-term impact of lower drug prices and investments in infrastructure and climate.

“Voters expected that they’d get rid of Trump and everything would turn out right,” said Peter Hart, a Democratic pollster. “The fact is, it’s been tough sledding. It’s not necessarily the president’s fault, but people are looking for an easier time.”

Although not every Democratic candidate is eager to stump with Biden, most are benefiting from the money he is helping to raise. The Democratic National Committee, which has raised $271 million already this cycle, has spent four times as much in Pennsylvania as it did during the last midterm election, boosting voter registration, paid advertising and get-out-the-vote efforts.

And many candidates are running on the accomplishments Biden is promoting on the campaign trail.

“People underestimate Joe Biden at their own peril,” said state Rep. Malcolm Kenyatta, a Democrat who has been stumping for Fetterman around the state since finishing behind him in the primary. “He’s doing what Democrats need to do in this moment, to talk about the really transformational things the president and Democrats in Congress have been able to get done with a very slim majority.”

Biden, he said, is “talking about things people can see, feel and touch. People [in Pittsburgh] were terrified that a damn bridge can just collapse while they’re on it. Biden is here now and saying that the bridge all these past presidents vowed to fix — he actually did. That really matters to people.”