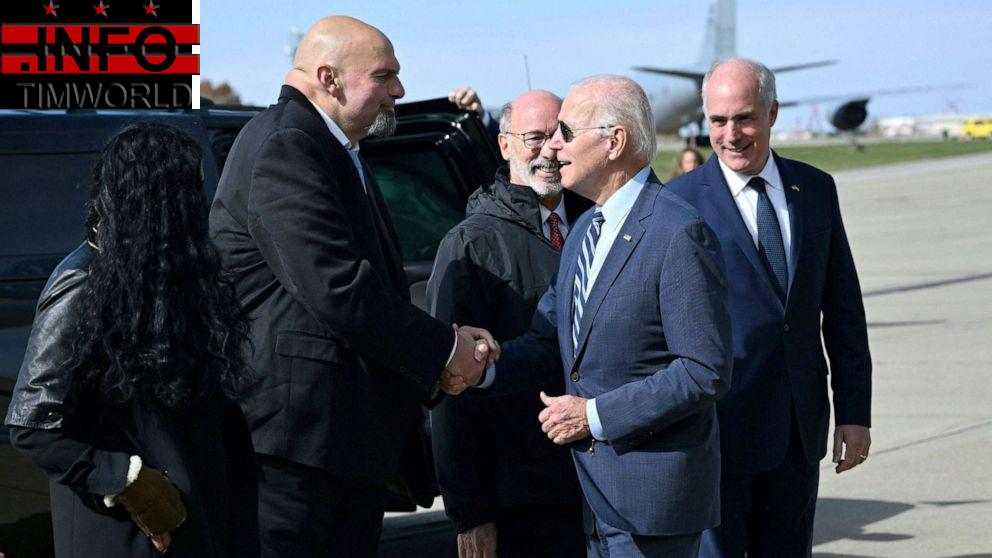 With the clock ticking toward next month’s midterm elections, President Joe Biden on Thursday traveled to battleground Pennsylvania to tout his infrastructure law and stump for Democratic Senate nominee John Fetterman.

Biden’s first stop was in Pittsburgh to visit Fern Hollow Bridge — which collapsed earlier this year when Biden was visiting the state. Fetterman, the state’s lieutenant governor, joined him there.

“You all told me about the emergency workers and pull the survivors to safety,” Biden said at the bridge site. “There were heroes that day, and a complete catastrophe was avoided. But it never should have come to this.”

Biden gave remarks on the progress in the rebuilding of the bridge, which he said will now be done in a single year thanks to the Bipartisan Infrastructure Law — one of the major legislative victories his administration’s been highlighting ahead of the Nov. 8 midterms.

Later Thursday, Biden is going to Philadelphia for a fundraiser in support of Fetterman, who’s running against Republican Dr. Mehmet Oz in one of the most competitive Senate races in the country.

Stepping off Air Force One in Pittsburgh on Thursday, Biden shook hands with Fetterman on the tarmac, telling him: “You’re gonna win.”

The event was a somewhat rare appearance for Biden with a Democratic candidate this cycle. Some other hopefuls in the party have kept their distance from the president as he faces low approval ratings, and a handful have gone so far as to say Biden shouldn’t run for office again in 2024.

Fetterman, when asked earlier this month if Biden should run again, said that should be a “decision made by Joe Biden.”

“It’s not a matter of anyone’s choice other than his, and I respect any choice he decides,” Fetterman said on the podcast “On with Kara Swisher.” Fetterman added that he believes Biden would beat Donald Trump in a rematch, if both were to seek office again.

ABC News White House Correspondent MaryAlice Parks questioned Biden about his appearances on the campaign trail as he departed the White House on Thursday morning.

“Mr. President, John Fetterman is gonna appear with you today in Pennsylvania … but there haven’t been that many candidates campaigning with you,” Parks said.

“That’s not true. There have been 15, count, kid, count.” Biden interrupted.

“OK, and are there gonna be even more?” Parks pressed further.

At the fundraiser in Philadelphia Thursday night, Biden and Fetterman appeared to loud cheers and applause from attendees.

“I tell you what, I want to be standing next to big John when he wins,” Biden said to cheers as he concluded 26 minutes of remarks about Fetterman, Republicans, his own accomplishments and more. “Because John, you have character, pal. Character matters. And you have it.”

“We’ve got to win,” he said. “John’s got to win. John’s got to win.” The president this week vowed to sign a law codifying Roe v. Wade’s abortion access rules — if Democrats have enough senators after the November elections.

“If we keep the Senate, keep the House, we’re going to pass, codify Roe,” he said to applause. “We’re going to make sure Roe v. Wade becomes the law of the land.”

He said Fetterman has “integrity” and “you never have to wonder that he means what he says.”

With a jab at Republican candidate Dr. Mehmet Oz, Biden said he didn’t realize Oz went to high school in Delaware, but “Delaware was smart enough to send him to New Jersey” and that Oz “is for undoing everything we have done.”

Biden warned that if Republicans take control of Congress, they will attempt to undo some of the president’s first-term achievements and also attacked their latest threats to block aid for Ukraine.

He also argued that if Democrats don’t win, people will pay more for drugs and insulin..

MORE: John Fetterman’s Lead In Pennsylvania Is Tightening — And So Are Democrats’ Chances In The Senate

The Pennsylvania Senate race between Fetterman and Oz — who has labeled Fetterman a radical and assailed him over crime and safety — is one that could determine which party controls the chamber next year, and Democrats see the contest as one of their best chances to pick up a seat and preserve or expand their bare majority. (Incumbent Republican Pat Toomey is retiring.)

FiveThirtyEight’s polling average for the Pennsylvania Senate race shows Fetterman leading by 5%, though his lead has tightened over the past several weeks.