Barbara Bush never sent her final letter to her children. Here’s what she wanted to say. 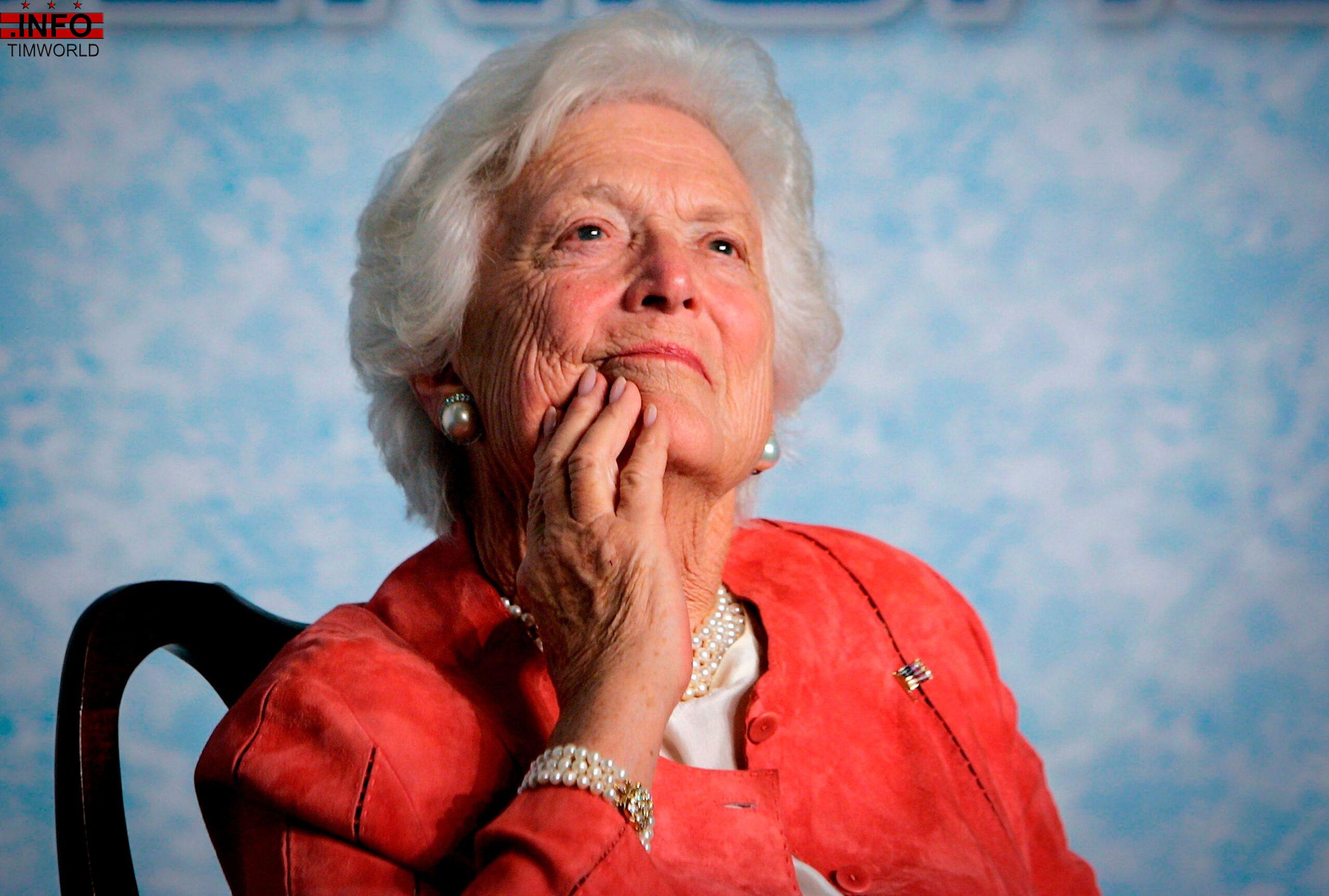 This essay is drawn from The Matriarch: Barbara Bush and the Making of an American Dynasty, published last month by Twelve Books.

HOUSTON – Barbara Pierce Bush knew she was entering the final days of her long and eventful life.

She was 92 years old. She had taken a fall, breaking her back and sending her to Houston Methodist Hospital. She was losing her battle with congestive heart failure, among other ailments. Soon her doctor would come into her hospital room to have a poignant conversation. The former first lady would be going home again, the doctor told her, but this time to hospice care.

Once again, Barbara Bush turned to her diary. She had kept a journal, sometimes intermittently and in various formats, since soon after she and her husband and their toddler, Georgie, had moved from the familiar comforts of New England to the booming Oil Patch in Texas. Seven decades later, she made the penultimate entry. Her children, as always, were on her mind. She wrote “Things I am grateful for” across the top, then began to draft a final letter to them.

“Dearest Children,” she typed into her laptop. “I have thought of writing this for a while.”

The letter was never finished. It stops mid-sentence, perhaps interrupted when a visitor walked into her hospital room, and it was never sent.

It is illuminating nonetheless – the final thoughts of a woman who for years led the list of most-admired women in the world but who was first and foremost a proud and protective mother.

I was apparently the first person to read the letter. Her son Neil told me her children weren’t aware that the letter existed until I raised it with them. A few weeks before she started to draft it, she unexpectedly gave me access to her diaries for the biography of her that I was working on, “The Matriarch: Barbara Bush and the Making of an American Dynasty.” She had donated them to the George Bush Presidential Library with the provision that they not be available to anyone until 35 years after her death – as it turned out, until 2053. Decades of diaries, not yet reviewed or organized even by the library’s archivists, were stacked in document boxes and kept under lock and key.

Barbara Bush: Did she still consider herself a Republican? ‘I’d probably say no today.’

After she died April 17, 2018, an aide in Houston printed out the final year of entries from her laptop and sent them to the library, giving me a glimpse into Bush’s last days.

It’s easy to picture her sitting up in her hospital bed, her mind sharp even as her body was failing, pecking out letters on the keyboard. As ever, she got straight to the point.

“Needles to say I am most thankful for five men and one lady,” she began, the first item on her list of things for which she was grateful. That was, of course, a reference to her husband of 73 years, George H.W. Bush; their four sons, George W., Jeb, Neil and Marvin; and their daughter, Doro.

She expressed appreciation for her husband’s parents and her own. Left unmentioned was her fraught relationship with her own mother, whose focus on her daughter’s childhood chubbiness contributed to a lifetime of insecurities about her looks.

“My dad was the finest brightest man,” Barbara Bush wrote, adding a wry observation about the family genes. “Although Neil and George got my dad’s hair (or growing lack of hair),” she wrote, saying their brothers had fared better in that department. “Jeb and Marvin are true Bushes with height and hair.”

The most important job she ever held

She had a lifetime of consequential roles, and historic ones. Only she and Abigail Adams were both the wife and mother of presidents, and of the two, only Barbara Bush lived long enough to see her son in the White House. She played a personal part in seven of the past 10 presidential campaigns. She was an active and activist first lady on issues of adult illiteracy and HIV/AIDS and more.

That was the core of her message at a string of college commencements she addressed, including one at Wellesley College that sparked student protests. One-fourth of the Class of 1990 signed a petition declaring that she wasn’t an appropriate role model for modern women such as themselves, women who expected to “be rewarded on the basis of our own merit, not on that of a spouse.”

She was gracious about the protests in public, but in her diary, she made it clear she felt embattled and wounded by the furor that followed. In the speech in June 1990, she opened with self-deprecation and humor, then acknowledged the debate raging over opportunities and expectations for women.

“We are in a transitional period right now – fascinating and exhilarating times, learning to adjust to the change and the choices we, men and women, are facing,” she said. “Maybe we should adjust faster, maybe slower. But whatever the era, whatever the times, one thing will never change. Fathers and mothers, if you have children, they must come first. You must read to your children, and you must hug your children, and you must love your children. Your success as a family, our success as a society, depends not on what happens in the White House, but on what happens in your house.”

Born in 1925 and married in 1945, Barbara Bush reflected the attitudes of her generation. George Bush was a devoted and revered father to their children, but he was often an absentee one, away as he built his oil business, then pursued a career in politics. He called the shots; she ran the household. By default, she became the family disciplinarian. “The Enforcer,” they dubbed her.

George W. Bush told me she was the quintessential “Cub Scout den mother” who would drill him on his French lessons as they made the long drive to his orthodontist appointments. When Neil Bush was diagnosed with dyslexia and struggled to learn to read, she spent years trying one approach after another until he succeeded. “Mom was always the one to hand out the goodies and the discipline,” Jeb Bush recalled. He called her “the traffic cop.”

“Somebody has to take care of the nest, and that’s me,” Barbara Bush said. She didn’t mind. She embraced it. She had six children, losing daughter Robin to leukemia at age 3. She suffered at least two miscarriages, once in the late 1940s and again in the early 1960s. “I would have liked one more,” another child after Doro, the youngest, was born in 1959, she told me, still a bit wistful. “Two girls would have been nice.”

In the final letter intended for her children, she praised them and the next generation for all they had achieved, for not relying only on the considerable advantages of their birth. “I am so grateful that our children and grand children all finished school and promptly went to work,” she wrote. “They did not feel entitled. They and their children support themselves and are now doing good works along with working in some cases.”

Then she thanked her friends. “The Saintly Stitchers who meet on Mondays at Saint Martins [Episcopal] Church. They treat me as a normal person although they do spoil me. We stitch kneelers for the church, I did two and then my eyes got bad and now I work on Santas and Clowns that either sit on a shelf.”

She mentioned the 1925 Club, a group of Texas women of a certain age who convened at the Bayou Club in Houston on the first Monday of the month for lunch and gossip. Some of them had been her friends since they were raising young families back in Midland. The prerequisite for membership included having a birthdate in 1925.

They had allowed one exception, she noted. “Members are Ada Gandy [Grundy] although she was born in 1924 and is deaf that she will interrupt as though she is…” The letter ends there.

Perhaps she meant that although Ada Grundy was deaf, “she will interrupt as though she isn’t.” Or perhaps she had some other thought. Whatever she had in mind, she already had made it clear she was grateful for the friendship of Ada and the others. And for her family. And, most of all, for her children, and the chance to have been their mother.