Bakhmut: The Ukrainian city where Russia is still advancing 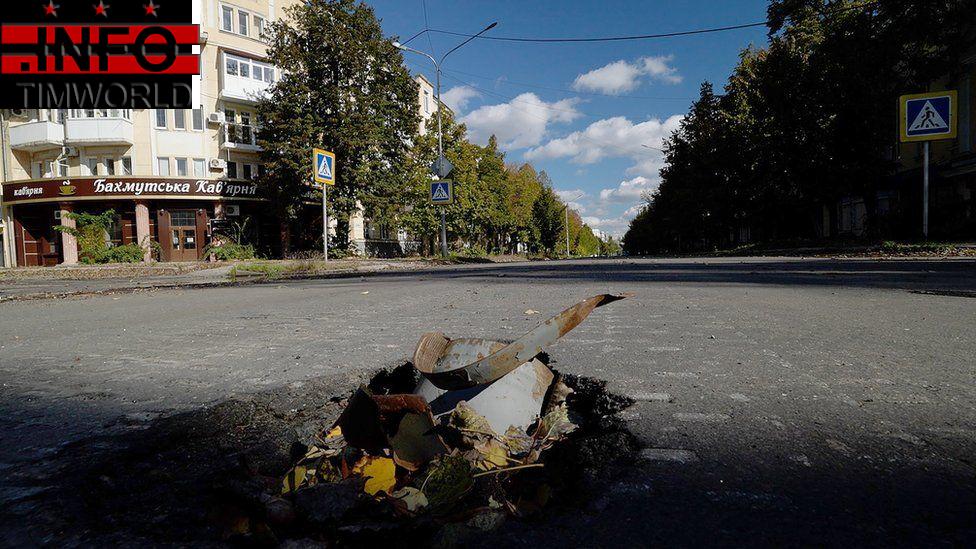 Bakhmut: The Ukrainian city where Russia is still advancing

Published2 hours agoSharecloseShare pageCopy linkAbout sharingImage caption, Bakhmut is within reach of Russian artilleryBy Jonathan BealeBBC News, BakhmutAlmost eight months on from Russia’s invasion of Ukraine, its forces are struggling while Ukraine has advanced and regained territory in the east and south. In the eastern Donbas region, the city of Bakhmut remains a Russian target, however, and its troops are making progress.

The city reverberates to the sound of constant shelling, day and night. It’s been going on for weeks.

Most of Bakhmut’s 70,000 citizens have already fled. Those who remain are mostly the elderly. They’re living without running water or electricity.

A small queue had formed for the latest evacuation, with volunteers still bravely driving a minibus in and out of the city.

Olena, who’s nearly 70 years old, was among those waiting to leave.

“People are exhausted,” she said, as yet another barrage rocked the city. Everyone reacts differently, she said – some reach for a cigarette, or something to chew on, while others just sit and cry.

Life had become too hard, she said, having to cook food on an open fire and fetch buckets of water.

Image caption, Olena says those left in Bakhmut are exhausted

As she climbed aboard the bus she clasped her hands in gratitude to be finally leaving.

In Bakhmut, Russia is desperately trying to change the narrative of this war. It’s one of the few places where it is not in retreat. Its advances here have been slow and costly, but Russian forces have been gaining ground.

There once may have been a logic to Russia’s focus on capturing Bakhmut. In the early summer it had taken the nearby cities of Severodonetsk and Lysychansk.

Bakhmut was meant to be next, with the expectation that Russian forces would then march on towards Kramatorsk and Sloviansk.

But that was before Ukraine launched its surprise counter-offensive in the east and south. Russian forces have been pushed back further north. The cities of Kramatorsk and Sloviansk are no longer in range of Russian artillery, as they were in July.

Russia has largely been forced to change from being an offensive to a defensive army.

Col Serhiy Cherevatyi, a spokesman for Ukraine’s Eastern Command, still doubts the Russians have the numbers or equipment to take Bakhmut – which he says is now the concentration of its military efforts. At the same time, he said, Russia is trying to build new defences further north around the towns of Svatove and Kremenna – where key supply lines are also now being threatened by Ukraine.

Col Cherevatyi told me much now depends on how many additional forces Russia can mobilise and the quality of those reserves. “So far we’re seeing that they’re of poor quality and they do not have enough weapons.”

I met the colonel in a scrapyard of destroyed Russian tanks and armoured vehicles near the recently liberated city of Lyman. It’s the image of the Russian army Ukraine wants to show the world – it is still restricting access for journalists who want to go to the frontline.

Col Cherevatyi claimed Russia had recently been sending old T62 tanks, built in the 1960s, to the frontline because so much of its more modern armour had been destroyed.

Last month President Putin announced he was calling up 300,000 conscripts for the war, and Russia now says this target will be reached within two weeks.

But the efforts to capture Bahkmut have been led by the private military contractor, Wagner Group, British military intelligence believes. The mercenary group has been fighting in Ukraine since 2014, and last month video emerged of its leader recruiting in a Russian prison.

“It’s either private military companies and prisoners, or your children – decide for yourself,” he told Russians.

Image caption, These destroyed Russian tanks are near the recently recaptured city of Lyman

It is still possible that the Russian forces may be able to capture Bakhmut. But what then?

“When we retreated from Lysychansk we exhausted the enemy,” said Col Cherevatyi.

His expectation is that Bakhmut might do the same. As for the increase in tempo of Russian long-range missile strikes, he says the only effect will be more motivation for Ukraine: “We beat them on the battlefield, and the only advantage they have left is missiles.”