AP-NORC Poll: Most Say Voting Vital Despite Dour US Outlook 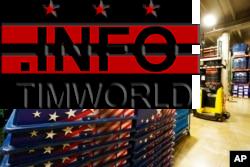 WASHINGTON —  From his home in Collegeville, Pennsylvania, Graeme Dean says there’s plenty that’s disheartening about the state of the country and politics these days. At the center of one of this year’s most competitive U.S. Senate races, he’s on the receiving end of a constant barrage of vitriolic advertising that makes it easy to focus on what’s going wrong.

But the 40-year-old English teacher has no intention of disengaging from the democratic process. In fact, he believes that the first national election since the Jan. 6, 2021, attack on the U.S. Capitol is “more significant” than in years past.

“This could very well sway the country in one direction or another,” the Democratic-leaning independent said.

Dean is hardly alone in feeling the weight of this election. A new poll from The Associated Press-NORC Center of Public Affairs Research finds 71% of registered voters think the very future of the U.S. is at stake when they vote this year. That’s true of voters who prefer Republicans win majorities in Congress, and those who want to see Democrats remain in control, though likely for different reasons.

While about two-thirds of voters say they are pessimistic about politics, overwhelming majorities across party lines — about 8 in 10 — say casting their ballot this year is extremely or very important.

FILE – The warehouse at the Maricopa County Elections Department stores all the equipment and signage for all the voting precincts in Phoenix, Sept. 8, 2022.

The findings demonstrate how this year’s midterms are playing out in a unique environment, with voters both exhausted by the political process and determined to participate in shaping it. That could result in high turnout for a midterm election.

In the politically divided state of Michigan, for instance, over 150,000 voters have already cast absentee ballots. A total of 1.6 million people have requested absentee ballots so far, surpassing the 1.16 million who chose the option in the 2018 midterm election.

In follow-up interviews, poll respondents reported distinct concerns about the country’s direction despite agreement that things are not working.

Rick Moore, a 67-year-old writer and musician in Las Vegas, said he’s dissatisfied with President Joe Biden, and “not just because I’m a Republican.” Moore called him “more of a puppet” than any other president in his lifetime.

“It’s important to me that Republicans are in control of as much as possible because we’re not going to get rid of the Democratic president anytime soon,” Moore said.

In general, Moore said, he doesn’t like the way Democratic politicians run their states, including Nevada Gov. Steve Sisolak, adding that Democrats are “using the word democracy to make all of us do what they want.”

“I would just like to see my voice more represented,” he said.

Since the last midterm elections, voters have grown more negative about the country and people’s rights: 70% say they are dissatisfied with the way things are going in the U.S., up from 58% in October 2018.

Republicans have become enormously dissatisfied with a Democrat in the White House. While Democrats have become less negative since Donald Trump left office, they remain largely sour on the way things are going.

Fifty-eight percent of voters also say they are dissatisfied with the state of individual rights and freedoms in the U.S., up from 42% in 2018. About two-thirds of Republicans are now dissatisfied, after about half said they were satisfied when Trump was in office. Among Democrats, views have stayed largely the same, with about half dissatisfied.

FILE – Cornelius Whiting fills out his ballot at an early voting location in Alexandria, Va., Sept. 26, 2022.

Shawn Hartlage, 41, doesn’t think her views as a Christian are well represented, lamenting that she’d love to vote “for someone that really stood for what you believe,” but that it’s very important to her to vote anyway.

The Republican stay-at-home mother of two in Washington Township, Ohio, said the direction of the country is “devastating,” noting both inflation and a decline in moral values.

“I’m scared for my children’s future,” Hartlage said. “You always want to leave things better for them than what you had, but it’s definitely not moving in that direction.”

Teanne Townsend of Redford, Michigan, agrees that things are moving backward. But the 28-year-old called out abortion, health care and police brutality as especially concerning areas in which rights are being threatened.

“We have minimum progression in the right direction for a lot of areas, especially for people of minority [groups]. Their rights are not the same as those of other races and cultures,” said the Democrat, who is African American.

A children’s health and mental health specialist, Townsend said she’s voting for her constitutional right to an abortion this year. If passed, the state’s ballot initiative would guarantee abortion rights in the Michigan Constitution.

“I feel like it’s just a lot that’s at stake,” Townsend said, adding that she’s both “optimistic and nervous” about the outcome but that it’s “the right thing” for people to be able to vote on it.

Despite the uncertainty in the outcome, Dean in Pennsylvania has faith in the American system to work for the will of the people.

“I think it’s important that our representatives represent what the majority of people want,” Dean said. “That’s what we claim we do in this country and it feels like it is what should happen. And I am hopeful.”

Kristen Stewart doesn’t want a role in Marvel movie: Here is why
The pandemic has revealed America’s zip code map of inequality
John Bolton may be sued because of his book