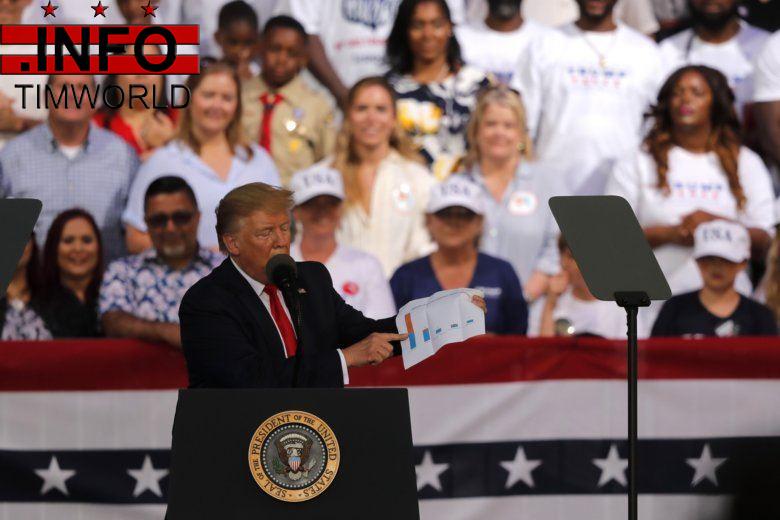 WASHINGTON (AP) — President Donald Trump brought his enduring fiction about hurricane aid for Puerto Rico to a rally crowd in Florida on Wednesday.

Pledging unstinting support for more hurricane recovery money for Floridians, he vastly exaggerated how much Puerto Rico has received.

Trump laced his speech in Panama City Beach with a recitation of falsehoods that never quit, touching on veterans’ health care, the economy, visas and more. A sampling:

TRUMP: “We gave to Puerto Rico $91 billion” — and that’s more, he said, than any U.S. state or entity has received for hurricane aid.

THE FACTS: His number is wrong, as is his assertion that the U.S. territory has set some record for federal disaster aid. Congress has so far distributed only about $11 billion for Puerto Rico, not $91 billion.

He’s stuck to his figure for some time. The White House has said the estimate includes about $50 billion in expected future disaster disbursements that could span decades, along with $41 billion approved.

That $50 billion in additional money is speculative. It is based on Puerto Rico’s eligibility for federal emergency disaster funds for years ahead, involving calamities that haven’t happened.

That money would require future appropriations by Congress.

Even if correct, $91 billion would not be the most ever provided for hurricane rebuilding efforts. Hurricane Katrina in 2005 cost the U.S government more than $120 billion — the bulk of it going to Louisiana.

TRUMP, boasting that his economic record has delivered the “highest income ever in history for the different groups — highest income.”

THE FACTS: Not so. He did not achieve the best income numbers for all the racial groups. Both African Americans and Asian Americans had higher income prior to the Trump administration.

The median income last year for a black household was $40,258, according to the Census Bureau. That’s below a 2000 peak of $42,348 and also statistically no better than 2016, President Barack Obama’s last year in office.

Many economists view the continued economic growth since the middle of 2009, in Obama’s first term, as the primary explanation for recent hiring and income gains. More important, there are multiple signs that the racial wealth gap is now worsening even as unemployment rates have come down.

THE FACTS: A perpetual falsehood from the president. Countries don’t nominate their citizens for the program. They don’t get to select people they’d like to get rid of.

Foreigners apply for the visas on their own. Under the program, citizens of countries named by the U.S. can bid for visas if they have enough education or work experience in desired fields. Out of that pool of qualified applicants, the State Department randomly selects a much smaller pool of tentative winners. Not all winners will have visas approved because they still must compete for a smaller number of slots by getting their applications in quickly.

Those who are ultimately offered visas still need to go through background checks, like other immigrants.

TRUMP, describing how veterans used to wait weeks and months for a VA appointment: “For the veterans, we passed VA Choice. … (Now) they immediately go outside, find a good local doctor, get themselves fixed up and we pay the bill.”

THE FACTS: No, veterans still must wait for weeks for a medical appointment.

While it’s true the VA recently announced plans to expand eligibility for veterans in the Veterans Choice program, it remains limited due in part to uncertain money and longer waits.

The program currently allows veterans to see doctors outside the VA system if they must wait more than 30 days for an appointment or drive more than 40 miles to a VA facility. Under new rules to take effect in June, veterans will have that option for a private doctor if their VA wait is only 20 days (28 for specialty care) or their drive is only 30 minutes.

But the expanded Choice eligibility may do little to provide immediate help.

That’s because veterans often must wait even longer for an appointment in the private sector. In 2018, 34 percent of all VA appointments were with outside physicians, down from 36 percent in 2017. Then-Secretary David Shulkin said VA care was “often 40 percent better in terms of wait times” compared with the private sector.

Choice came into effect after some veterans died while waiting months for appointments at the Phoenix VA medical center.

TRUMP, on the Choice program: “That’s a great thing for our veterans. They’ve been trying to get it passed for 44 years. We got it passed.”

THE FACTS: He’s incorrect. Congress approved the private-sector Veterans Choice health program in 2014 and President Barack Obama signed it into law. Trump is expanding it.

TRUMP, on Democrat Beto O’Rourke’s crowd size at a Texas rally before he launched his presidential campaign: “He had like 502 people.”

THE FACTS: Trump sells short O’Rourke’s crowd, though it has grown in his mind since he claimed the Democrat only got 200-300 at his El Paso gathering in February. Trump had a rally there the same day.

O’Rourke’s march and rally drew thousands. Police did not give an estimate, but his crowd filled nearly all of a baseball field from the stage at the infield to the edge of outfield and was tightly packed.