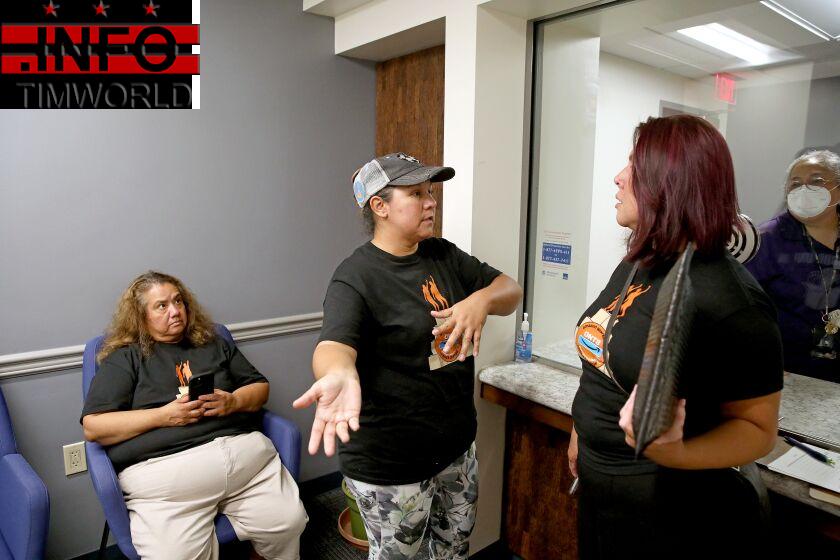 Amazon.com., shocking Wall Street, has projected the slowest holiday-quarter growth in the company’s history. The shares plunged about 13% in extended trading.

The Seattle-based company, which reaped record profits during the pandemic, said sales during the current period will rise just 2% to 8% as shoppers reduce their spending in the face of economic uncertainty. Any figure in that range would be the slowest increase ever for Amazon’s “peak season,” which usually finds warehouse employees rushing to get orders out on time. And the e-commerce giant’s other businesses aren’t riding to the rescue. Amazon Web Services, the cloud-computing division, and the advertising unit each reported muted third-quarter revenue growth by their lofty standards.

“We’re taking actions to tighten our belt,” Chief Financial Officer Brian Olsavsky said Thursday on a call with journalists after the results were released. Olsavsky said Amazon would pause hiring in some businesses and wind down products and services in areas where the company determines its money would be better spent elsewhere.

Some investors had hoped the company’s commanding market share in the U.S. and Europe, the massive scale of its logistics business and the cost-cutting would insulate Amazon from slowing consumer spending.

The forecast suggests that isn’t the case, and Amazon joined other previously high-flying tech giants such as Alphabet and Microsoft in reporting disappointing results.

Asked about how the upcoming shopping season, Olsavsky said Amazon is “optimistic about the holiday, but we’re realistic that various forces are weighing on people’s wallets.”

Amazon projected that revenue would be $140 billion to $148 billion in the fourth quarter, far short of analysts’ average estimate of $156 billion. Some independent sellers on Amazon’s website, who account for a majority of unit sales, are bracing for a rough holiday season. Adobe forecast that U.S. e-commerce sales in November and December will rise just 2.5% from the prior year.

In the period ended Sept. 30, revenue increased 15% to $127.1 billion, Amazon said in a statement. Analysts had projected sales of $127.6 billion. Profit was 28 cents a share, compared with 31 cents a year earlier, adjusting for a 20-to-1 stock split that took effect in June.

Amazon said changes in foreign exchange rates — primarily a strengthening U.S. dollar that made the company’s sales in other currencies less lucrative — reduced its revenue during the quarter by about $5 billion. The company expects those headwinds to continue through the current period, contributing to the weak guidance.

Despite Chief Executive Officer Andy Jassy’s pledge to cut costs, Amazon’s expenses jumped almost 18% to $125 billion. It was the fifth consecutive quarter the company’s expenses have increased faster than revenue growth. The number of full- and part-time employees rose 5% to more than 1.54 million.

“The core e-commerce business has come under pressure from changing shopping habits from the boom seen over the pandemic and a consumer with less disposable income,” said Matt Britzman, an analyst at Hargreaves Lansdown. “Clearly, Amazon went too big, too soon, on its expansion plans and it’s had to put the brakes on and then some to try and get costs back under control.”

Technology and content expenses, a rough proxy for the company’s spending on research and development, as well as AWS, surged 35%, the biggest jump since 2018. That partly reflects bigger stock payouts Amazon is making to recruit and retain employees in a competitive market for technologists.

Still, Amazon returned to profitability after two quarters of losses, posting $2.9 billion in net income. The prior losses reflected declines in the value of the company’s roughly 17% stake in Rivian Automotive. The electric automaker’s shares are down sharply following a November initial public offering, but have steadied in recent months.

Sales at AWS increased 27% to $20.5 billion. Analysts, on average, projected $21 billion, according to data compiled by Bloomberg. It was the cloud unit’s slowest year-over-year growth since Amazon began breaking out the division’s performance going back to 2014.

The backlog of cash that businesses and governments have committed to spending on the cloud unit in the future climbed to $104 billion, though Amazon executives said business customers had also asked the company for help lowering their bills for the service.

Advertising unit revenue rose 25% to $9.5 billion, roughly half the growth rate it has posted on average since Amazon began reporting the division’s results. Online store revenue rose 7.1% to $53.5 billion.

Pipeline break spills 45,000 gallons of diesel in Wyoming
It’s been around 27 years, but this Bellingham retailer may close later this month
Primary Care Doctors Are Left Out of the Vaccine Rollout