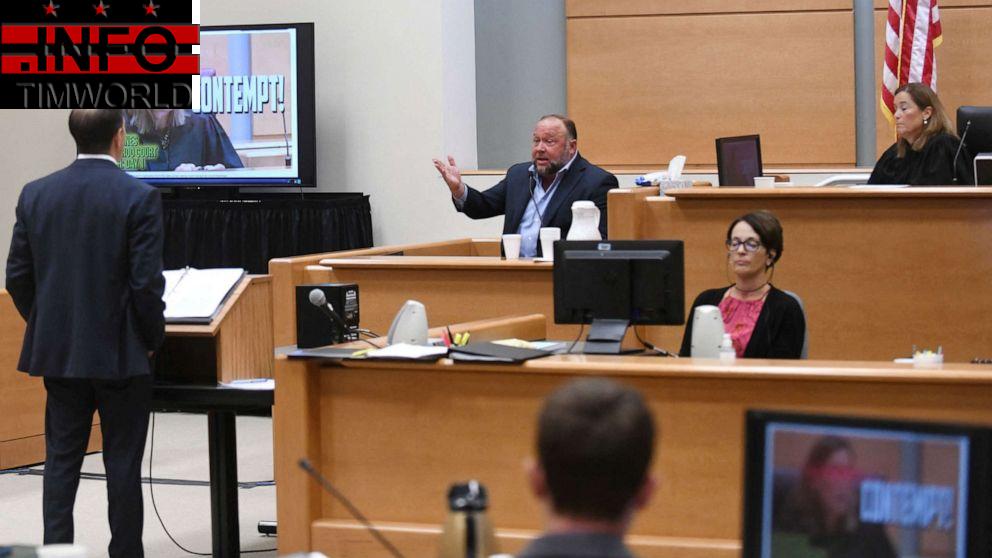 Conspiracy theorist Alex Jones testified in a Connecticut courtroom Thursday in a second defamation trial to determine what the InfoWars host should pay to Sandy Hook families.

The tempestuous testimony was so frequently interrupted by objections and sidebar conferences at the bench, Judge Barbara Bellis at one point told the jury, “You’re going to get your exercise in today, those of you who wear Fitbits.”

Jones, who has suggested the families who successfully sued him for defamation have a political agenda because they’ve done work on gun control, acknowledged the risks involved in his profession as a conspiracy theorist and provocateur.

“The world isn’t an easy place. When people become political figures they get in the arena,” Jones said.

“Were you just trying to suggest that my clients, these families, deserve what they got because they stepped into the arena?” Mattei asked.

Jones answered “no” as his lawyer objected to the question.

Mattei accused Jones of putting a target on the backs of families through his repeated lies about the massacre being a government-staged hoax and the families of victims crisis actors.

Jones conceded he said it looked like one of the parents, Robbie Parker, “was acting” while speaking about his daughter Emily, who was among the first graders killed.

“No, I didn’t,” Jones insisted before his lawyer objected.

“These are real people. You know that, Mr. Jones,” Mattei said.

“Just like all the Iraqis you liberals kill and love. You’re unbelievable. You switch emotions on and off when you want. It’s just ambulance chasing,” Jones replied.

“Why don’t you show a little respect,” Mattei demanded. “You have families in this courtroom here that lost children, sisters, wives, mothers.”

Jones shot back, “Is this a struggle session? Are we in China? I’ve already said I’m sorry hundreds of times and I’m done saying I’m sorry.”

Jones said he legitimately thought the massacre might have been staged and would not apologize for it.

The jury will decide how much in damages Jones should pay to an FBI agent who responded to the scene and eight families of victims that Jones called actors.

Prior to testifying, Jones has spoken out amid the trial outside the Waterbury courthouse this week, calling the judge a “tyrant” and the trial a “political hit job.” In a press briefing Wednesday, he told reporters he did not “premediatively question Sandy Hook,” and that he apologizes if he has caused anyone pain but “didn’t create the story” of Sandy Hook being a hoax.

InfoWars founder Alex Jones speaks to the media outside Waterbury Superior Court during his trial on September 21, 2022 in Waterbury, Connecticut.Joe Buglewicz/Getty Images

He repeatedly said he would not perjure himself by saying he’s guilty.

“You can’t have a judge telling you to say that you’re guilty when you’re not. That is insane,” he said.

There is no guilt in civil trials like this one. The plaintiffs successfully sued Jones for defamation in November 2021 over his comments, which included calling them “crisis actors,” saying the massacre was “staged” and “the fakest thing since the three-dollar bill.”

Bellis found Jones liable for damages by default because he and his companies, like Infowars, showed “callous disregard” for the rules of discovery.

InfoWars founder Alex Jones speaks to the media outside Waterbury Superior Court during his trial on September 21, 2022 in Waterbury, Connecticut.Joe Buglewicz/Getty Images

Beyond Jones, the jury so far has heard from several parents, including Jennifer Hensel, whose 6-year-old daughter, Avielle Richman, was among the 20 children killed in the massacre. She told the jury Wednesday that she still fears for her family’s safety after years of receiving hate mail from people questioning that her daughter had died and checks the backseat of her car before getting in.

After her husband, Jeremy Richman, died by suicide in 2019, she started receiving emails from people calling his death fake as well, she said.

“People were in the cemetery around Avielle’s grave marker looking for evidence that Jeremy had died,” Hensel said.

Other parents have also testified about death threats, rape threats and confrontations outside their homes.

MORE: Sandy Hook survivors speak out for first time — and share heartache ‘that it keeps happening’

The Connecticut trial comes a month after a Texas jury ordered Jones to pay nearly $50 million in damages to the parents of one of the victims.

In that defamation trial, Jones was successfully sued by the parents of a 6-year-old boy who was killed in the 2012 Sandy Hook Elementary School massacre after he claimed that the shooting — where 20 children and six adults were killed — was a hoax, a claim he said he now thinks is “100% real.”