Ahead of US Midterms, How Has US Immigration Policy Changed? 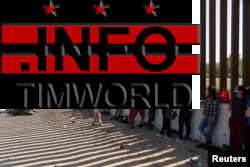 Washington —  As U.S. midterm elections approach, immigration remains one of the country’s most contentious political issues, mostly concerning the number of people trying to enter the U.S. at the southwestern border.

While a record number of migrants are arriving at the U.S. Mexico border — for which Republicans blame President Joe Biden, a Democrat — data analyzed by the Migration Policy Institute (MPI) show the Biden administration has been active on immigration, issuing 296 executive orders.

And the Biden administration has kept in place some Trump-era policies.

US-Mexico border and the asylum program

The Biden administration has continued Title 42, a policy implemented in March 2020 by order of the U.S. Centers for Disease Control and Prevention (CDC) to protect public health during the pandemic. More than 1 million migrants seeking to apply for asylum in the United States were expelled to their home countries or Mexico in fiscal 2022. Implemented and enforced as a blanket policy by the Trump administration, Title 42 has been modified under Biden to allow unaccompanied minors and families with young children to enter the U.S.

FILE – Asylum-seeking migrants, mostly from Venezuela and Cuba, wait to be transported by U.S. Customs and Border Protection agents after crossing the Rio Grande River into the U.S. from Mexico at Eagle Pass, Texas, July 14, 2022.

U.S. law offers asylum to people facing persecution in their home countries on the basis of race, religion, nationality, political opinion or membership in a particular group.

In May 2022, the Biden administration announced it would end Title 42. Republican-led states sued, and a court ruling has kept the policy in place without an expiration date.

The Biden administration was successful in ending another Trump-era policy known as Migrant Protection Protocols (MPP), which required asylum-seekers to wait in Mexico for an immigration court to hear their case.

Because of a federal court order, migrants are no longer being enrolled in MPP. Those already enrolled in MPP and waiting in Mexico will be allowed to enter the U.S. for their next court date and not have to return to Mexico.

On May 31, 2022, the administration began implementing a change in how it handles some asylum claims. The new guidance is aimed at streamlining the asylum process and sending fewer cases to backlogged U.S. immigration courts. U.S. asylum officers would adjudicate the asylum claims of the migrants placed into expedited removal proceedings after May 31.

New US Asylum Guidance Takes Effect on a Limited Basis

Biden initially kept the U.S. refugee annual ceiling at 15,000, the smallest number in modern U.S. history, prompting protests from Democrats on Capitol Hill. In May, the administration raised the ceiling to 62,500. However, the number of refugees actually admitted into the U.S. totaled 11,411 for fiscal 2021, which ended September 30.

The Biden administration has raised the fiscal 2022 refugee cap to 125,000. But as of July, the program has admitted 17,690 refugees. Advocates say that the administration is going to fall short of its ambitious target, but they note the refugee program is still rebuilding after years of constrained admissions.

Biden is expected to set a new ceiling on October 1, but challenges associated with the pandemic and resource allocation remain.

The Biden administration vowed to make better use of existing enforcement resources away from the border, which include guidelines on detention, arrests, and removals. Department of Homeland Security (DHS) Secretary Alejandro Mayorkas announced the new enforcement priorities, “Guidelines for the Enforcement of Civil Immigration Laws” on Sept. 30, 2021.

Mayorkas ordered Immigration and Customs Enforcement (ICE) officers to focus on migrants who posed a threat to public safety, national security threats, and those who had recently crossed the U.S.-Mexico border illegally. Under former President Donald Trump, ICE officers were given broad discretion to arrest and deport any immigrants.

Some Republican-led states sued the Biden administration, arguing the guidance mostly focuses on individuals convicted of aggravated felonies while ignoring people who committed other crimes. A federal court judge has since blocked some elements of the September guidelines.

According to MPI, current DHS priority enforcement guidelines focus on limiting immigration enforcement against specific populations, locations and situations. Other than that, ICE officials can still make “individualized enforcement decisions” taking into consideration the circumstances in each case.

“ICE officers have been instructed generally not to arrest or detain pregnant, postpartum, or nursing individuals — though they can still initiate removal proceedings — and not to take enforcement actions against noncitizens who are applying for immigration benefits based on their status as crime victims,” MPI said.

Other places where officers are urged to restrict enforcement actions are at or near courthouses, schools, hospitals, religious institutions, public ceremonies such as funerals or weddings, and protest sites.

Mayorkas also directed DHS subagencies to make sure noncitizens who served in the U.S. armed forces are returned to the United States if immigration officers determine they were unjustly deported.

Some immigrants who moved to the U.S. under unusual circumstances have received temporary authorization to stay in the country. That is the case for those under Temporary Protected Status (TPS), Deferred Action for Childhood Arrivals (DACA), and humanitarian parole.

Under the Biden administration immigrants from 15 countries currently have or are eligible for TPS, which allows applicants to temporarily live and work in the U.S. and defers them from deportation. TPS designations can be made for 6, 12 or 18 months at a time.

DACA, a policy created in 2012 by the Obama administration that allows those brought to the U.S. as minors to attend school and work legally in the U.S., marked its 10th year. Recipients, however, live in limbo as the program has been the focus of numerous court cases.

DACA recipients are currently waiting on a ruling from the U.S. 5th Circuit Court of Appeals in a case challenging the legality of the program.

The Biden administration announced in August the final version of a rule to codify DACA. The rule keeps the program as created by the Obama administration. If no legal challenges are filed, the rule would take effect on Oct. 31, 2022.

And although TPS and DACA recipients are allowed to live and work in the U.S., the programs do not offer a pathway to citizenship.

After more than a year of closures, U.S. embassies and consulates around the world have reopened for immigrant and nonimmigrant visa appointments. Yet applicants still face significant wait times for visas as staffing levels recover from pandemic shutdowns.

A State Department spokesperson told VOA in August that visa interview wait times vary by country and depend on local conditions and demand. The wait time for a routine visa appointment at half of U.S. consulates “is less than four months, and at some posts is far shorter than that,” the spokesperson said.

The Biden administration finalized a rule in September to remove hurdles to immigration for anyone deemed “likely” to become dependent on public benefits while trying to obtain a visa or become a U.S. permanent resident.

The final rule is scheduled to take effect on December 23. The DHS announcement restores the historical understanding of a “public charge” that had been in place for decades.

It means DHS will no longer label a noncitizen as a public charge if they received certain non-cash benefits that were available to them such as the Supplemental Nutrition Assistance Program or other nutrition programs, Children’s Health Insurance Program (CHIP), Medicaid — except for long-term institutional care — housing benefits, or anything related to immunizations or testing for communicable diseases.

On his first day in office, Biden unveiled sweeping immigration reform legislation, the U.S. Citizenship Act of 2021, which included an eight-year path to citizenship for the estimated 11 million undocumented immigrants in the U.S.

The bill is seen as all but dead on Capitol Hill. Other immigration bills have been introduced, but Congress has yet to pass any legislation.