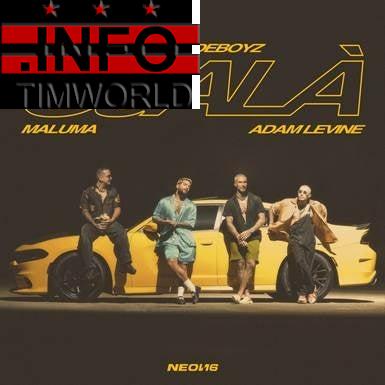 Adam Levine’s name has been on fans’ lips amid scandal — and now his voice is going to be back in their ears.

The Maroon 5 frontman is set to release his first Spanish-speaking song, “Ojalá,” in collaboration with Maluma and The Rudeboyz. Due out on Oct. 20, the track will mark The Rudeboyz’s debut single and comes more than a decade after the two producers, Bryan Lezcano Chaverra and Kevin Mauricio Jiménez Londoño, first met and started making music.

Meanwhile, this marks the newest music from the 43-year-old musician and soon-to-be father of three since he faced publicized allegations in September of cheating on wife Behati Prinsloo, who is currently pregnant. Among the women who have spoken out about Levine is Sumner Stroh, who alleged she had an affair with the singer for about a year and shared screenshots of purported social media messages from Levine on TikTok. In newer messages, he allegedly told her he wanted to name his third child Sumner if the baby is a boy.

“A lot is being said about me right now and I want to clear the air,” he said in a statement on social media. “I used poor judgment in speaking with anyone other than my wife in ANY kind of flirtatious manner. I did not have an affair, nevertheless, I crossed the line during a regrettable period in my life. In certain instances it became inappropriate; I have addressed that and taken proactive steps to remedy this with my family.”

Continued Levine, “My wife and my family is all I care about in this world. To be this naïve and stupid enough to risk the only thing that truly matters to me was the greatest mistake I could ever make. I will never make it again. I take full responsibility. We will get through it. And we will get through it together.”

While Prinsloo has not spoken publicly about the scandal, she was spotted arm in arm with Levine in early October backstage at The Shaquille O’Neal Foundation’s “The Event” fundraiser in Las Vegas.

“Adam wanted to speak out as soon as possible so that any stories didn’t get out of hand,” a source previously told ET. “He wanted to confront everything head on and address things right away. He is embarrassed and recognizes that his actions were inappropriate.”

The source added, “He’s trying to make things right with Behati and his family.”

From 28 days to 19 hours: The story of the Kangaroo route
Kelly Rowland Gives Birth to Baby No. 2 With Husband Tim Weatherspoon
Here Are Some of the Best Free Fitness Classes Around DC This Week: December 16 – 22